Posted by Parents for Choice in Education on April 30, 2019 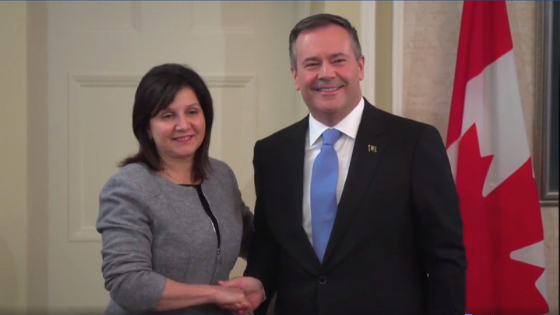 According to her biography from the Alberta government website, as a "mother of seven, and proud grandmother of three, LaGrange understands the importance of the role that parents play in the development of children."

We encourage you to leave a short comment or visitor post on Minister LaGrange’s Facebook page, welcoming her to her new role and letting her know you will stand with her as she supports education choice, which is integral to maximizing quality, student success, freedom and genuine diversity.

Once legislature and constituency offices are organized, specific contact information for all MLAs will be made available at the Legislative Assembly’s MLA listing page.

The Alberta Court of Appeal released their decision on the Bill 24 interim injunction yesterday, which was heard several months ago.

According to a statement issued by the Justice Centre for Constitutional Freedoms:

CALGARY: The Justice Centre for Constitutional Freedoms (JCCF.ca) is reviewing the Alberta Court of Appeal ruling upholding a lower court ruling that dismissed that application for an interim injunction that would stay the operation of Alberta’s Bill 24 pending a ruling in regards to its constitutionality.

In dissent, Justice McDonald stated that he would enjoin the Government of Alberta from withholding or reducing funding or de-accrediting the schools in question.  On account of this dissent, a right of appeal to the Supreme Court of Canada exists.

According to a Global News report:

“Two of three Alberta Court of Appeal justices have dismissed the appeal, while the third said part of it should be allowed.

Justices Frederica Schutz and Dawn Pentelechuk wrote in their decision that the public good of protecting the safety and privacy of children, as well as promoting an inclusive school environment, is extremely high.

Dissenting Justice Bruce McDonald wrote that schools should not have their funding withheld or lose their accreditation for the next academic year when the constitutional challenge has yet to be heard.”

This Court of Appeal decision reminds us that surrendering rights and freedoms into the hands of a few unelected individuals within the court system -- who are not subject to the same public accountability and transparency as our legislators -- should always be viewed as a last resort option.

Healthy, well-functioning democracies do not just happen, but are borne out of the cumulative effect of proactive decisions and intentional habits of engaged citizens over the long term.

That said, in the coming weeks we will be watching closely the actions of the new Premier, Minister of Education and MLAs.

We need to be vigilant to hold Premier Kenney and the UCP accountable to their promises, including that they would proclaim the Education Act, which would also eliminate dangerous changes to law brought into effect through the NDP’s Bill 24.

Voting on election day is very important, but it is like taking the last few steps to cross the finish line of a marathon.

The capacity to cross the finish line depends on all the important steps that happened (or didn’t happen) in the days, the weeks, the months and the years leading up to that point: the training, practicing and preparations that allow you to run the race to the end.

The reality is that keeping a democracy healthy and functioning requires a lot more effort long before election day.

Indeed, as we head into this new chapter of education in Alberta post-election, there remains much work to be done.

Over the past several years, we have been repeatedly inspired by people’s motivation to action when there are imminent threats.

You may remember the intense spikes of public interest and engagement after the Guidelines were published in January 2016, when we incredibly had over 4,000 people attend simultaneous rallies in Edmonton and Calgary.

You may also recall the spurts of engagement after the PRISM Toolkit was exposed in Oct 2016, after the sexually graphic material was brought to light in March 2017, and when Bill 24 was introduced in the Legislature in November 2017.

While our efforts definitely made an impact, all these efforts were reactive, responding to something which had already happened.

The unfortunate truth is that when we only react when threatened, it is often too little too late to respond in a way that would be most effective.

Here’s the clincher: if we truly want the most bang for our buck when it comes to expending precious time and effort and being able to see real results then we need to shift our focus from reactive to proactive actions.

We are looking to form an action team of citizens who are committed to getting more proactively involved in order to strengthen freedom and education choice in our province.

We plan to hold training sessions and share key information regarding specific, targeted opportunities that arise, building a network that will work to proactively ensure that the assaults on families and freedoms in the area of education are prevented from happening again.

If you are interested in being part of this key team of people, please e-mail Theresa Ng, PCE Communications Advisor, at [email protected] and indicate you would like to become more involved.

"[Education Minister David Eggen] succeeded in removing the rights of each and very (sic) Alberta parent to know if their K-12 child... is being exposed to sexual content through clubs and activities offered in Alberta schools."  [READ MORE]

Thank you to the concerned mother who wrote this letter to the editor, voicing her concern over the poorly written legislation brought into effect by the NDP's Bill 24.

Learn specifically how recent changes to law are endangering the safety of children and stripping the freedom and autonomy of principals, staff and schools through PCE's Toolkit resource.

Those who watched the provincial election leaders debate earlier this month heard about the concern of class sizes, and the millions of dollars which has been spent trying to reduce them, without success. This article delves into the background info for you.

"Despite investing $3.3 billion since 2004 into the class-size initiative, students may be worse off now than they were in the early years of the program..." [READ MORE]