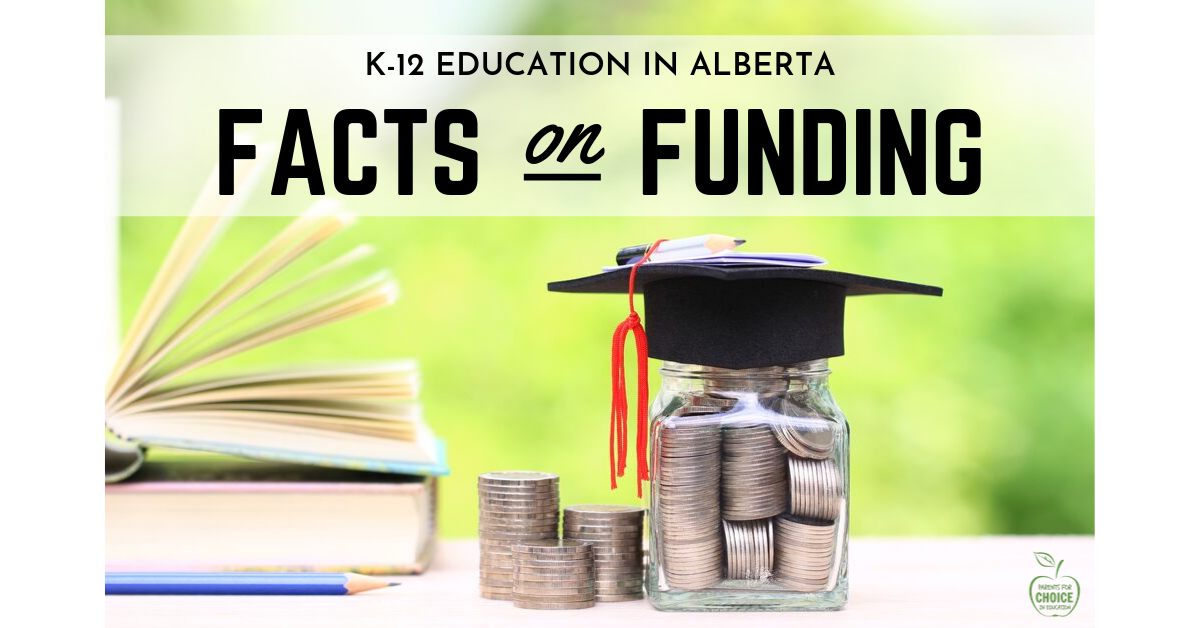 “Funding for K-12 education in Alberta is provided primarily on a per student basis. The funding framework allocates funding to school authorities based on the location of the school authority and its schools and local population characteristics.”

One of the reasons education choice has thrived in Alberta is due to funding support, meaning education choice is accessible to Albertans regardless of income, not just reserved for those who are wealthy.

However, there have been increasingly aggressive attacks to eliminate this funding support for any education options outside of government-run schools.

Here is a sample of quotes from the ongoing campaigns often pursued by special interest groups, large public school boards and the Alberta Teachers' Association (ATA):

Unfortunately, those who make these allegations neglect to mention their own vested self-interest in destroying education choice options and also miss five key facts in their arguments.

At least $1.2 billion dollars were saved by taxpayers over eight years, thanks to parents sending their children to independent schools, as evidenced in a 2019 report commissioned by PCE and the Canadian Taxpayers Federation and co-authored by Mark Milke and Paige T. MacPherson.  An additional $707 million was saved over the same period thanks to students accessing home education.

According to a 2017 Fraser Institute study, 82% of independent schools are classified as "non-elite" and the families who choose these education options have an average after-tax family income closely comparable to families with children in public schools.

Thus, the allegation that independent schools are somehow attended only by elite, wealthy families is unsupported by evidence.

The reality is that many of these families make considerable financial sacrifices to cover the extra costs - on top of the regular education taxes they pay - in order to access an education option where their children are thriving.

As established above, the majority of families attending independent schools make significant financial sacrifices to prioritize education that meets the unique needs of their children. Stripping the partial funding support they currently receive would mean many could no longer afford to access schools where their children are thriving.

Ironically, by eliminating funding support, the ATA and others would actually create the very outcome they claim to want to prevent - a two-tier education system where only the wealthy can still afford education choice and no one else can.

Access to a variety of educational choices, funded either fully or partially through public taxpayer dollars, should honour and reflect the diversity of Albertan taxpayers who fund the system together.

We should be extremely concerned by anyone who suggests that public purse strings be used as a means of coercion to enforce a one-size-fits-all government-run approach to education for all children and their families.

To suggest that only some educational choices are “valid” is to say that the needs and values of some people are worthy of taxpayer support - and others are not. This premise undermines and fundamentally corrupts the functioning of a pluralistic, multicultural and free society.

Fact #5: It is a fool's errand to improve one child's education by stripping another child of theirs

Independent school options currently serve approximately 30,000 students or 4-5% of Alberta's student population and are specifically chosen because they meet important needs for children that are not being provided for within government-run schools.

Aren't these children just as deserving of a successful education option that is meeting their specific needs?

The truth is that defunding independent schools will do nothing to correct the chronic budget issues persisting in government-run schools.

Instead of hyper-focusing on stripping dollars provided to their independent school neighbours, public school boards ought to ask themselves how best to maximize their own massive subsidies (for example, public districts in Edmonton and Calgary each receive more than $1 billion) so that no student is left behind.

Below is an excerpt from an article written by PCE: Understanding home education in Alberta: What is it and how is it structured?

By law, all home education programs must be operated under the authority of either a private/independent school or by a public/Catholic school district.  In law these are called an “associate board” or “associate private school”... The government "counts" and allocates funds to the supervising associate board or associate private school, based on enrollment as of September 30th. The board is then responsible for allocating money to the home education program accordingly.

The parent is eligible for resource reimbursement only for the components of their program that fall under the Home Education Regulation and, by law, the amount must be at least 50% of the total amount received by the associate board or associate private school from the government. In 2017/18, a parent providing a home education program was eligible for $836 in resource reimbursement.  [READ MORE]

*We thank Association of Independent Schools and Colleges in Alberta (AISCA) for allowing us to share their excellent video on funding and independent education. They can be found at www.aisca.ab.ca