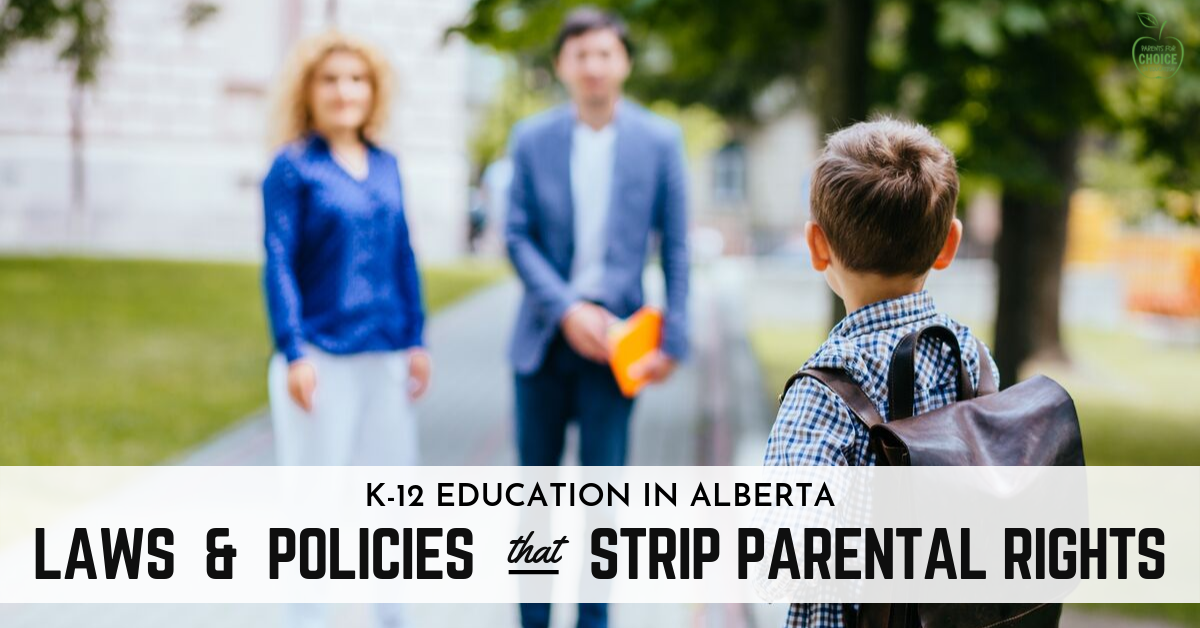 Parents for Choice in Education (PCE) advocates for an excellent, quality-oriented, and choice-driven education system which recognizes parental authority.

PCE opposes any mandates or measures that:

Following is an overview of the current education landscape related to laws and policies that strip parental rights:

The UCP government passed Bill 8 in July 2019, switching Alberta's foundation education legislation from the School Act to the new Education Act, as of September 1, 2019.

That switch has eliminated all the legislative changes which were created by the NDP through Bill 24 (if you need a refresher on what was included in the NDP’s Bill 24, read our blog article from November 2017).

Thankfully, this change means that provincial legislation no longer explicitly forbids communication between schools and parents, nor offers a free pass for clubs and activities to offer sexual and religious content without any parental notification/opportunity to opt-out.

PCE applauds all the parents and citizens who have pushed for these important changes over the past several years. Your efforts have made a difference – thank you!

It is incumbent upon parents to understand the policies which govern the schools where their children attend, in order to discern what information may be withheld from them by school staff.

While Alberta’s provincial laws are set by 87 Members of the Legislative Assembly (MLAs), there are also school board trustees elected at the local level who are responsible to set policies and procedures for each public and Separate (Catholic) school division.

As of September 2019, provincial law no longer dictates that all school boards must include clauses in their policies that force staff to keep secrets from parents.

However, the majority of public and Separate (Catholic) school divisions, and even some private schools, continue to keep secrecy clauses in place.

This means that it is elected school board trustees - not provincial government MLAs - who are now choosing to include specific clauses in their local policies which continue to force staff to withhold information from parents.

We have combed through all the policies of the separate and public school jurisdictions and have given links to the exact location of the policies that still enforce secrecy. As of September 29th, 2022, 34% of the school boards have removed the secrecy policy.

Learn more about which school divisions still have secrecy policies in place here.

Do students have a right to privacy from their parents?

A two page “Advisory on Disclosing a Student’s Participation in a School Club” was released by the Office of the Information and Privacy Commissioner (OIPC) of Alberta in June 2019.

While this advisory was a supposed attempt to clarify the parameters of laws regarding student privacy (i.e. FOIP/PIPA), it has led to further questions.  PCE intends to pursue these questions with the OIPC.

Alberta principals, children and school choice at risk: The dangers of 35.1

Below are the specific clauses from section 35.1 of the Education Act, followed by an explanation of how this law impacts Alberta's K-12 children, principals and schools.

35.1(1) If one or more students attending a school operated by a board request a staff member employed by the board for support to establish a voluntary student organization, or to lead an activity intended to promote a welcoming, caring, respectful and safe learning environment that respects diversity and fosters a sense of belonging, the principal of the school shall

(a) permit the establishment of the student organization or the holding of the activity at the school, and

(b) designate a staff member to serve as the staff liaison to facilitate the establishment, and the ongoing operation, of the student organization or to assist in organizing the activity.

(2) For the purposes of subsection (1), an organization or activity includes an organization or activity that promotes equality and non-discrimination with respect to, without limitation, race, religious belief, colour, gender, gender identity, gender expression, physical disability, mental disability, family status or sexual orientation, including but not limited to organizations such as gay-straight alliances, diversity clubs, anti-racism clubs and anti-bullying clubs.

(4) The principal shall immediately inform the board and the Minister if no staff member is available to serve as a staff liaison referred to in subsection (1), and if so informed, the Minister shall appoint a responsible adult to work with the requesting students in organizing the activity or to facilitate the establishment, and the ongoing operation, of the student organization at the school.

Fact #1: Creates a legally protected class of K-12 clubs and activities based on vague and subjective criteria.

While this section of law is popularly represented in the media as pertaining only to sexual and gender minority clubs, it actually opens the door to all sorts of clubs and activities in our K-12 schools that have legal jurisdiction to exist outside the authority of school staff and parents.

As stated in a March 2015 PCE column published in the Edmonton Journal:

“the Alberta government has opened a veritable Pandora’s box of club requests around issues for which children may feel they are being discriminated - race, religious belief, colour, family status — you name it. The conflicts between any number of clubs within the same school, or contradictions between clubs and the central culture of the schools themselves, will result in unforeseen negative consequences across the system…  the legislation does not preclude other clubs that meet vague and subjective criteria.”

Fact #2: Forces principals to grant permission to clubs and activities, or else they are breaking the law.

Every principal of every school in Alberta must say “yes” whenever any single student – of any age – asks to start a “voluntary student organization” or insists upon a related school-wide activity – whether that be a voluntary student organization or activity focused on sexuality and gender, or any other topic that meets the vague and subjective criteria explained in Fact #1.

If the principal does not grant permission to a K-12 child who requests a club or associated activity as described in section 35.1 of the Education Act, then the principal is breaking the law.

Principals are stripped of decision-making authority, forced into an untenable position where they must follow the dictates of law, with no discretion or consideration provided for the unique needs of students and their school community.

Without any stated limitations, children from kindergarten upwards, have full and unprecedented legal authority over adults in the school when it comes to clubs and activities which must be granted by principals.

There are also no considerations for the social and developmental capacity of the child to ensure that their needs and the needs of their peers are met in a manner cohesive with the school's mission and identity.

It is important for parents to understand their child can be impacted by clubs, even if their child is not a club member.

This is because section 35.1 gives all K-12 students in Alberta the legal authority to demand school-wide activities, including assemblies, guest speakers, diversity days and political activities -- all of which are listed as suggestions by the Alberta Teachers' Association for "social change" and "visibility" -- thereby impacting the entire school community, not just the students within the club (see pages 30, 31, 55, 56 of the ATA Guide for Teachers).

The wording of the law puts the legal authority over these clubs and activities into the hands of K-12 children, not adults. Note the verbs in the legislation associated with school staff: while a principal “shall grant permission”, a staff liaison/facilitator is tasked to “facilitate” or “assist”, not direct or lead.

Simply put, school staff do not have the legal authority to ensure the content, resources and facilitators of these clubs and activities are consistent with the school’s mission and identity or even age-appropriate to the kids who attend.

In fact, there is a growing influence from an industry of external organizations, especially those related to sexuality and gender, who are increasingly accessing K-12 children through school clubs (for example, see here and here) and even soliciting children's personal information to "support" children privately without any parental awareness.  This involvement of external organizations is especially concerning in light of sexually graphic material which was made available via "support" to K-12 students, as well as numerous first-hand reports PCE has received, which are available on our "Health and Sexual Education" page.

March 8, 2016 – Calgary Herald
NDP should take a measured approach to bullying in schools