Posted by Parents for Choice in Education on November 03, 2017 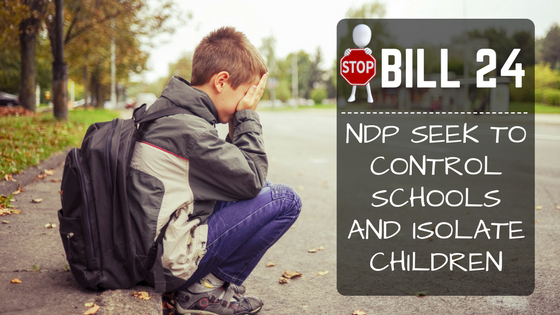 Yesterday, November 2, 2017, Minister Eggen introduced Bill 24, which would enforce secrecy, strip professional decision-making authority, remove sexual content opt-out provisions and replace a parent’s loving care with the strong arm of the state, all under the coercion, consultation and supervision of a select few.

After reading the proposed legislation, we have identified the following five key concerns.

1) Enforced secrecy with no stated exceptions

Bill 24 states that parent notification would be limited only to the fact that a club will be established or an associated school-wide activity will take place:

(6) The principal is responsible for ensuring that notification, if any, respecting a voluntary student organization or an activity referred to in subsection (1) is limited to the fact of the establishment of the organization or the holding of the activity (Page 2-Bill 24)

This means that school staff would be legally forbidden to share information with parents when it comes to their own individual child's participation in these clubs or activities.

Legislating this one-size-fits-all approach ignores the unique, local circumstances where school staff must have the professional decision-making authority to accommodate the genuine diversity of student needs in Alberta schools, including, but not limited to:

Currently, section 50.1(1) of the School Act states that:

A board shall provide notice to a parent of a student where courses of study, educational programs or instructional materials, or instruction or exercises, include subject-matter that deals primarily and explicitly with religion or human sexuality.

However, Bill 24 would amend this section to exempt student organizations or activities from this same notification/opt-out provision:

This means that if your K-12 child is exposed to sexual content during GSA clubs or GSA sponsored school activities you, the parent, would be kept in the dark.

This is extremely alarming, given that the Alberta GSA Network, organized by the provincial “experts” at the Institute for Sexual Minority Studies and Services (iSMSS), directed K-12 children to community supports with sexually graphic material and resources.

Disturbingly, these are the very same individuals pushing the government for these legislative changes to isolate children.

Albertans deserve to know that experts from iSMSS have continued to deem resources such as the Sex A-Z Zebra Cards as appropriate for certain populations of youth, even after concerns were raised regarding access to this specific resource via the GSA Network website.

Bill 24 amendments would not only pertain to clubs in schools, but would also extend to associated school-wide activities, including assemblies, plays and performances.

Principals are forced to “immediately grant permission” to these activities at the school or risk legal repercussions if they do not comply, thereby stripping principals of professional decision-making authority in schools:

Section 16.1 is amended (a) in subsection (1) (i) by repealing clause (a) and substituting the following: (a) immediately grant permission for the establishment of the student organization or the holding of the activity at the school, and (ii) in clause (b) by adding “subject to subsection (4), within a reasonable time from the date that the principal receives the request” before “designate”; (b) in subsection (3) by adding “or activity” after “the organization” (Page 1-Bill 24)

Bill 24 erodes the authority of governing bodies, such as elected school board trustees, superintendents, parent councils and the guidance of faith leaders, in relation to the actions of the principal of a school, forcing the principal to ignore traditional advisors and accept the direction of the government:

(ii) require a principal to obtain the approval of the superintendent or board or to follow other administrative processes before carrying out functions under section 16.1,

Bill 24 would empower the Education Minister to simply amend or replace any policies of any school board that does not comply with the Ministry’s demands, or to impose any terms or conditions of the Minister. This strips the autonomy of local school boards, making it impossible for them to be genuinely responsive to the needs of their local students, parents and staff.

If passed, this sweeping state power could enforce policy changes on schools that are explicitly hostile to the foundational raison d’etre of unique school settings. To do so would be to strip these settings of the very framework upon which they exist, thereby destroying genuine school choice. Freedom of choice is meaningless if all choices are forced to be the same.

HOW DID WE GET HERE?

Parents for Choice in Education has been repeatedly sounding the alarm around the dangers children face in schools when parents are sidelined and schools are stripped of professional authority.

In March 2015, when Bill 10 passed in under four hours with almost unanimous support, PCE was one of very few organizations that recognized that this new legislation had set our schools, families, and most importantly, children, on a dangerous course in Alberta.

As said by John Carpay, from the Justice Centre for Constitutional Freedoms, “governments never strip citizens of fundamental freedoms without pointing to a good cause as the justification”.

The justification for Bill 10 was that sexual and gender minority children were at a higher risk of bullying, substance abuse, homelessness, self harm and suicide and needed the strong arm of law to protect them.

Though anti-bullying protocols and GSA clubs already existed in Alberta schools, including some faith-based schools, Bill 10 was passed. It stripped school autonomy by enforcing Gay Straight Alliances in every school at the command of a  single child. No protections were added to Bill 10 to enshrine parental notification and engagement to ensure they remained the primary caregiver for their own children whenever possible.

PCE recognised at the time that while the intention to care for sexual and gender minority children in school was noble, that dangers were overlooked. There was no consideration of the risks associated with counselling children without sufficient oversight or prioritizing the involvement of their most important support systems - their families.

Secondarily, what many didn’t and continue to not recognise, is that when rights and freedoms of schools and families are removed, the government gains increasing powers of coercion and control.

Despite Minister Eggen’s claims that he is introducing Bill 24 after having engaged in a collaborative process with schools, many schools never actually received any feedback on the policies they provided. Minister Eggen continues to govern through the media and ignore the real concerns of schools and families across Alberta.

Since the passage of Bill 10, we have seen a relentless and systematic encroachment upon the rights of parents and the independence of schools and their staff to engage in local, responsive and respectful care and education of their own students in partnership with parents.

Some in the media and the NDP government are claiming Bill 24 is a reaction to recent political leadership changes. However, this is a lie.  For several years now activists have insisted that the "patchwork" of school policies produced by Bill 10 and the Guidelines for Best Practices were insufficient. Bill 24 is the long awaited result.

While PCE has never opposed peer support groups in schools where the children, staff and parents deem such support systems appropriate, we recognized that Bill 10 - which became section 16.1 of the School Act - stripped authority from the adults in schools, placing total control into the hands of children as young as five.

Into the void created by the sidelining of professionals and parents in schools, activists have taken up shop. Standing behind Minister Eggen as he offered Bill 24 to the media on November 2, 2017, was none other than Dr. Kristopher Wells - the individual who was a key influence in the promotion and content of Bill 10 (Hansard for March 10, 2015, pages 541, 545 and 548), co-authored the Guidelines for Best Practices and was the “driving force” behind the Alberta GSA Network which directed K-12 children to sexually graphic material.

It is essential the parents of Alberta stand against the bullying tactics of the Ministry of Education to reclaim their position as the primary caregivers and educators of their children and insist that schools be given the freedom to partner with parents to ensure the highest standard of safety and care for all Alberta students.

For more background information, articles, columns and videos on this topic please visit the "Be Informed" section of our website.  You can also refer to two legal analysis documents prepared by the Justice Centre for Constitutional Freedoms: Unconstitutional: How Bill 24 violates our Charter freedoms as well as Parental Rights are Human Rights: Alberta’s Bill 24 violates Charter freedoms

WHAT CAN YOU DO?

CONTACT YOUR MLA: MLAs will be debating and potentially voting on Bill 24, as early as next week.

It is essential you make your voices heard! Communicate your concerns through email or phone call (CLICK HERE to find your MLA’s contact info).

SHARE this blog article with others so they are aware of these alarming legislative changes that will impact children in Alberta. We have also prepared a one page double-sided information sheet that can be easily printed and distributed to those in your networks: CLICK HERE

DONATE: Become a monthly core supporter of Parents for Choice in Education for as little as $10 or $20 a month so we can continue to speak on behalf of you, the many thousands of Alberta parents, who are increasingly concerned about the direction of legislation and school board policies on the safety of their children in Alberta schools. Go to our DONATE page and look for the “Monthly Donation” button.

Thank you to each one of you for taking action to ensure the genuine safety of children in Alberta schools by speaking out about these concerns regarding Bill 24.