IMPORTANT UPDATE: On September 20th, 2019, it was announced that the constitutional challenge to Bill 24 was discontinued because a shift in education legislation means the primary sections of law being challenged no longer exist.  Thank you to everyone who showed their support for this court challenge and helped advocate for these changes to law! 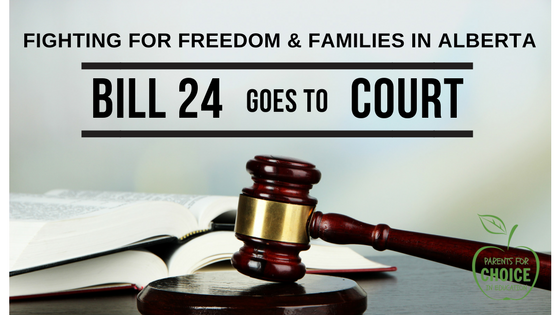 “There are two types of laws: just and unjust. I would be the first to advocate obeying just laws. One has not only a legal but a moral responsibility to obey just laws.

Conversely, one has a moral responsibility to disobey unjust laws. I would agree with St. Augustine that 'an unjust law is no law at all.'”

Parents for Choice in Education (PCE) unequivocally condemns Bill 24 as “an unjust law” which is “no law at all”.

On behalf of our thousands of supporters, PCE is joining forces with courageous families, schools and organizations across Alberta to confront Bill 24 in the courts.

We stand with the Justice Centre for Constitutional Freedoms (JCCF) in challenging this legislation.

King reminds us: “Human progress is neither automatic nor inevitable…Every step toward the goal of justice requires…the tireless exertions and passionate concern of dedicated individuals.”

Why is PCE participating in the court action?

PCE has several concerns with how Bill 24 isolates and endangers Alberta students:

3) Allows clubs to demand school-wide activities that can push political activism and social change and the principal, by law, must say yes

Visit the section of our website titled "Legislation and Policies that Strip Parental Rights" for more in-depth information.

What is the Bill 24 Court Action Seeking?

Prior to Bill 24 professionals in schools had the discretion to decide when and how to involve parents regarding the education and care of their children during school hours. Parents felt confident that they would be informed if their children were at-risk in schools for any reason.

Bill 24 has had a destructive impact on the important partnership between parents and teachers that is essential to student success.

This court challenge now seeks to restore this professional discretion and once again allow schools to fully inform parents of their child's curricular and extracurricular activities using their professional judgement on a case-by-case basis.

The court action also seeks to ensure that schools are free to create a safe and welcoming environment for all students that respects the school’s unique mission and identity, in consultation with parents and the local school community.

Who is filing the court application and on behalf of which organizations and individuals?

The Justice Centre for Constitutional Freedoms (JCCF) is filing the court application and will represent PCE, along with a broad and diverse coalition of parents and schools, united by the desire to uphold parental rights and school autonomy.

JCCF is a Calgary-based national non-profit charitable organization whose mission is to defend the constitutional freedoms of Canadians. You can subscribe to JCCF updates from their homepage.

What is the timeline for this court action?

On June 20, 2018 lawyers from JCCF sought an injunction to prevent Bill 24 provisions from being put into force until after the Court determined the constitutionality of the Bill.

Justice Kubik issued a ruling a few days later and dismissed the injunction application, a decision that JCCF lawyers stated they may appeal.  While the injunction ruling is disappointing, keep in mind this is just the beginning of the court process as a full hearing on the constitutionality of Bill 24 is not expected until mid to late 2019.

For further updates on the proceedings of court action, refer to the summary on the JCCF wesbite.

What can we do?

Every citizen across Canada and around the world who recognizes the destructive nature of Bill 24, which endangers children in school and strikes at the very foundation of our free nation - our families - must be silent no more.

At a time when so few are willing to take the risk and stand out above the crowd, we especially commend the courageous Alberta families and schools who have joined this court action.

They deserve our utmost gratitude as they fight for our children, our families and our freedom in Alberta. The outcome of this court challenge will set a precedent in all future parental rights court cases in Canada, so it is essential all Canadians pay attention.

Let’s show our strength in numbers in order to edify and encourage those who are fighting on the frontlines to oppose this unjust law, as well as to send a message to our political representatives across Canada and around the world that we will no longer accept legislation that undermines our families and our freedoms.

Add your name below, even if you live outside Alberta, to declare your support for those fighting Bill 24 in the courts.

“…a man has not begun to live until he can rise above the narrow confines of his own individual concerns to the broader concerns of all humanity.”