Posted by Parents for Choice in Education on November 14, 2017 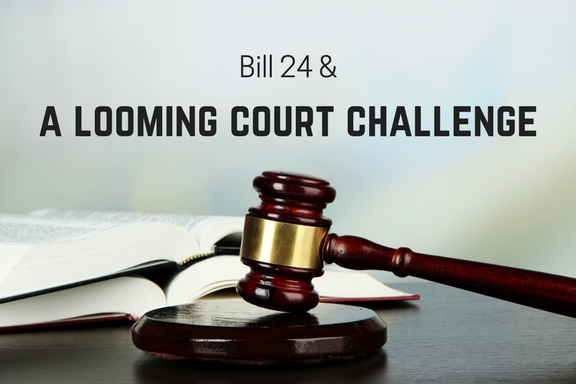 We are pleased to share the following media release issued this morning by the Justice Centre for Constitutional Freedoms (also available on their website) and thank JCCF for their tireless work in protection of constitutional rights in Canada.

CALGARY: The Justice Centre for Constitutional Freedoms (JCCF.ca) today announced that it will represent a number of parents, independent schools and other stakeholders in a court challenge to the constitutionality of Bill 24, if this legislation is passed by the Legislative Assembly.

A summary of the legal analysis can be found here.

The identity of the parties bringing this constitutional challenge will be revealed in early 2018, when court papers are filed.

Prohibiting any parental (or other) notification concerning Gay-Straight Alliances (GSAs) or a student-requested “activity,” other than notice of the establishment of a GSA or the holding of such “activity” generally;

Requiring independent religious schools (as opposed to only public schools, as currently required by the School Act) to create a “welcoming, caring, respectful and safe learning environment that respects diversity and fosters a sense of belonging”;

Requiring a principal at a religious school, if a request for a GSA is made, to “immediately grant permission for the establishment of the school organization or the activity at the school” without board consultation or consideration of parental rights or the school’s religious character;

Bypassing the School Act requirement for parents to be informed of any classes or activities which include sexual content and allowing them to opt out. This means that parents cannot inform the school that they do not want their children to participate in a GSA or GSA related-activity on the basis of sexual content;

Allowing the government to rewrite school policies if the Minister of Education deems them not to conform to the School Act, as amended by Bill 24;

The Supreme Court of Canada has ruled that government may not interfere with parental rights to make all decisions for their children, including children between ages 13 and 18, unless the government first proves that the parents’ decisions are harmful to the child, or that the child is a mature minor and has made a fully informed decision contrary to parental views.  Government may only interfere on a case-by-case basis, and government must bear the onus of proving or justifying its interference in a court of law, upon notice to the parents, who can dispute the government’s claims.  The infringement of parental rights is not justified by broad or blanket laws which remove rights from all parents. Requiring school administrators and teachers, by law, to withhold information from all parents without exception is contrary to the Constitution, contrary to Canada’s legal obligations under international law, contrary to the Alberta Bill of Rights, and contrary to other Alberta legislation such as the Family Law Act.

Section 7 of the Charter only permits interference with a parent’s role after due process, on a case-by-case basis, in accordance with the principles of fundamental justice.  Section 2 of the Charter protects a parent’s right to educate based on parents’ own conscience and religious beliefs.

The prohibition on parental notification concerning a GSA or “activity” violates the fundamental right of parents to be informed concerning their children’s education.  Further, there is no real benefit to be realized from the prohibition, since the few children whose parents may in fact pose a risk to them will continue to be protected as they already are, absent Bill 24.

Bill 24 evidences the government’s intention to control and change the religious character of independent schools.  In so doing, the government undermines or effectively negates the exercise of parental rights in education, through the choices of parents to opt out of the public schools and enrol their children in schools consistent with their beliefs, religious and conscientious.  Rather than respecting parents’ choices, Bill 24 instead compels independent schools to adopt policy positions in support of the government’s preferred LGBTQ ideology.  This requirement violates parents’ and private schools’ fundamental freedoms of conscience and religion, thought, belief, opinion and expression, and association, guaranteed under section 2 of the Charter.

Bill 24 is therefore unconstitutional, as both its purpose and effect is to deny the rights of parents under section 7 and section 2 of the Charter, and to do so without the requisite justification.

NOTE: JCCF relies entirely on the voluntary donations of Canadians who support their work in support of freedom and justice. CLICK HERE for more information on how to donate.

Globe and Mail article by Judy Arnall, a certified child-development specialist, parenting coach, and bestselling author.
Gay-straight alliances are greatly needed, but that does not mean Bill 24 should pass