Posted by Parents for Choice in Education on November 15, 2017 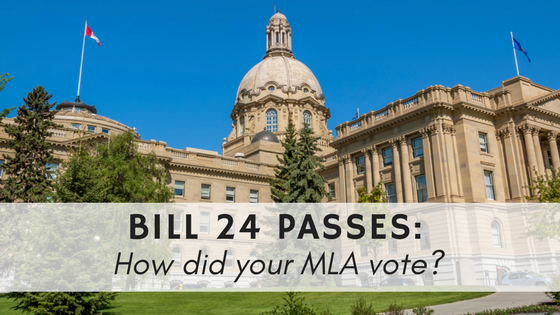 Today Bill 24 passed third reading with a vote of 42 in favour and 23 opposed.

The reason we have a sense of hope, even in the midst of this news, is that up until now there has been little effort on the part of our elected representatives to stand against the ever-increasing government wedge being driven between children and their most important resource and ally, their loving parents.

Today all that changed.

23 MLAs represented us, the concerned citizens of Alberta, and voted against Bill 24.

They gathered their courage and chose to stand up for the protection and safety of children in Alberta over political expediency. For this we should be grateful.

Interestingly, of the 54 NDP MLAs who could have voted, only 38 showed up to support Bill 24. The question we ask is why did nearly 30% of the NDP caucus not show up for this important vote? 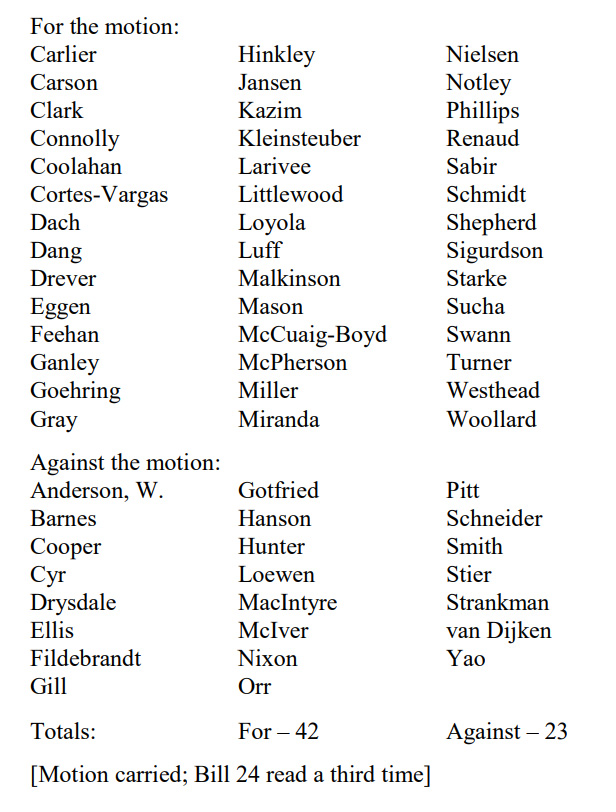 If you do not see your MLA’s name listed here, contact them and ask them why they were not present for the vote.

For those who want to discern more deeply where your MLA stood on Bill 24, you can explore Hansard, which is the written record of everything that is spoken in the Legislative Assembly.

Any Hansard sections pertaining specifically to Bill 24 - whether during first, second and third reading, as well as committee of the whole - are compiled on the Legislative Assembly website and can be accessed HERE.   Find any statements made by your MLA by pressing “CTRL F” and typing in your MLA’s last name.

Many of you may be asking “Where do we go from here?”

In the coming days Parents for Choice in Education will compile an action plan for what each concerned citizen can do in their own homes, schools, and the community at large. This will include more information on  political action, as well as the court challenge being embarked upon by the Justice Centre for Constitutional Freedoms.

For now, congratulate yourselves: Thanks to the deluge of letters sent from you to Alberta MLAs, as well as your signatures on the Parental Consent is Key open letter, we finally have representatives that are standing with us, and for us, as we battle for the return of parents to their rightful position as the primary educators and caregivers of their own children.