Thousands Gathered at the May 14, 2016 PCE Sponsored Rallies!

Posted by Parents for Choice in Education on May 17, 2016 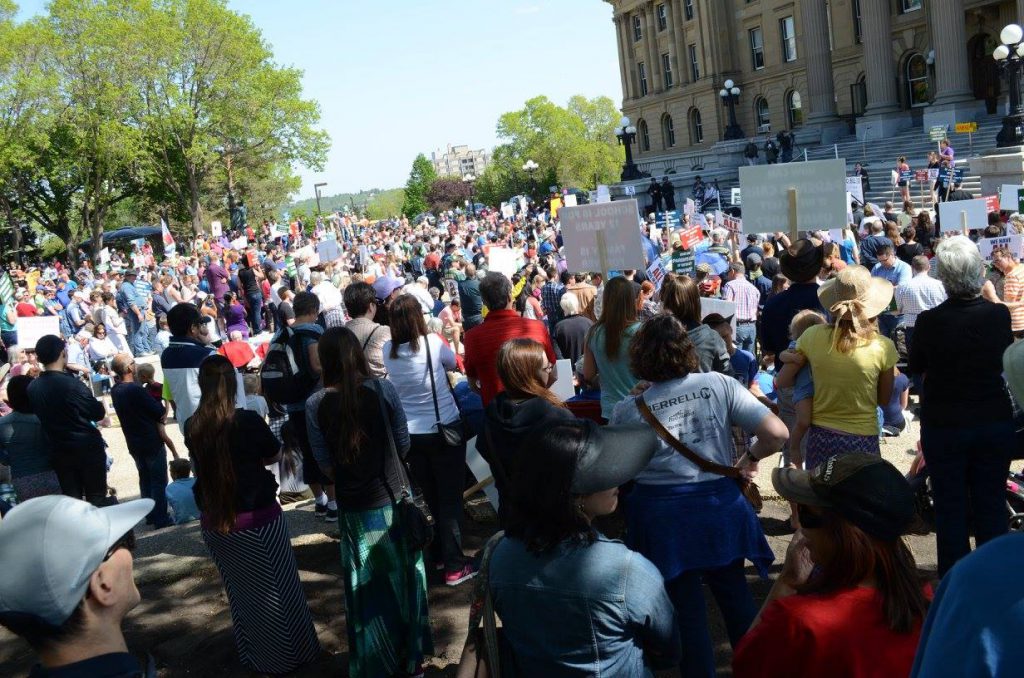 On May 14, 2016 thousands of Albertans gathered at the Legislature in Edmonton and the McDougall Centre in downtown Calgary for the first Parents for Choice in Education sponsored Peaceful Rallies to Protect Alberta Children by upholding parental rights at 2 p.m.

The purpose was to advocate for amendments to Bill 10 and demonstrate opposition to school board policies that implement controversial aspects of Alberta Education’s recent “Guidelines to Best Practices” document.

Parents for Choice in Education (PCE), a non-partisan, non-profit, grass-roots parents’ group, began planning the rallies a year before, following the passage of Bill 10 in March 2015.

In the past year, PCE received over 20,000 signatures on petitions calling for amendments to Bill 10 to respect parental rights.

People from across the province traveled to attend the rally - some even arranged buses from Red Deer and Grande Prairie.

Both rallies included strong representation from a diversity of cultural communities, where word has been spreading about opposition to Bill 10 and the Guidelines.

“I grew up in an aristocratic country, thus I cherish greatly the freedom that we enjoy today, including that we, as parents, should decide what is good or bad for our kids, not the state, the province or the federal government” said Stephen Zhang, who was born in mainland China and immigrated to Canada ten years ago. “I spoke with around a hundred Chinese Canadian parents about the content of Bill 10 and the Guidelines. Not one of them like it.”

Donna Trimble, Executive Director of PCE, said the primary concern motivating the rallies centres around parental rights. “It is the responsibility of governments in free nations to protect citizens from coercion, so they can take care of themselves, their families and their neighbours. Parents are the primary educators, nurturers and decision makers on behalf of their children. We know a child’s success is strengthened when parental involvement is supported and encouraged, so why is the Alberta government trying to weaken the important role of parents in their child’s education?”

Trimble said she has seen a dramatic rise in the level of concerns across the province, as increasing numbers of parents become aware of the risks and impacts of Bill 10 and the Guidelines on K-12 students.

A key organizer of the Calgary McDougall Centre Rally, Rahel Manaye, said, "As an immigrant Canadian, we understand that our kids are encouraged to exercise their culture, beliefs and language in the school system. But the new Guidelines and Bill 10 strips that right from our children and their parents. We believe the best, loving and caring learning environment in Alberta schools should be achieved by including parents in the children's education, not by excluding them."

Theresa Ng, who worked as a teacher in Edmonton’s public school system for several years and spearheaded the March 1st #‎protectABkids Twitter Campaign also joined with Trimble to help organize the peaceful rallies.

“Tens of thousands of concerned Albertans have written letters, phoned MLAs, signed petitions and some even signed up for Twitter just to tweet their concerns on March 1st. Albertans are becoming increasingly frustrated because they are reasonably and respectfully advocating for a more thoughtful, balanced approach, yet their concerns continue to be dismissed, misrepresented and minimized by elected officials in this province.”

With slogans such as “How can parents care when left unaware” and “Encourage relationships, not secrets”, the rally focused attention on the risks of excluding parents from the education of their children.

Concerns for students with disabilities

One of the speakers at the Edmonton rally was Sheldon Johnston, father of five, who drove in from Medicine Hat.

As three of his kids have autism, he spoke of the “profoundly negative effect” that Bill 10 and the Guidelines have had on children with developmental disabilities, a population numbering as high as 1 in 10 students in the province.

“Autistic children and those with developmental delays are more vulnerable to the influence of other students and adults, and are thus easily manipulated. The legislated privacy of GSAs expose such children to risks of manipulation, which parents cannot monitor. Given the fact that transgender youth are 5 times more likely to be autistic than the general population, and autistic children are 8 times more likely to be gender variant, special protections must be in place to consider the needs of children with co-existing conditions.”

The importance of parents being involved in their children’s education was echoed by another Calgary parent. Assaad Sakr, who is a professional engineer and father of three, moved to Canada nine years ago after having lived in Lebanon and Dubai. He agreed that “genuine and thoughtful discussion” is necessary on such an important topic, citing several concerns with Bill 10 and the Guidelines including the risks of giving “ultimate control to the child”.

According to Sakr, “The school staff are forced to accept the child’s self-declaration as the only evidence needed. No parental involvement, no professional opinion is sought, nothing. This is far reaching.” He adds that “eliminating the need for any adult input on such an important matter is not helpful. Kids need help and guidance and should not be left to fend for themselves on such an important topic”.

In addition to widespread concerns regarding parental involvement, some also spoke out to defend their right to freedom of religion.

Previously serving as Director for the Interfaith Community Action Association, John Hilton O’Brien spoke about the concerns for those of many religious faiths who are opposing Bill 10 and the Guidelines. He said many citizens would agree that “no government should attempt to impose belief systems on families” and that “The Guidelines are an attempt to impose a particular belief system on children whose families already hold different beliefs.”

The legal concerns with Bill 10 and the Guidelines were highlighted by lawyers who attended each rally.

“Parents have the constitutional right to transmit their values and beliefs to their children” said Calgary lawyer Marty Moore, from the Justice Centre for Constitutional Freedoms.

Based on the thousands of Albertans from across the province who took the time to show up and make their voices heard, Moore expressed hope that the Alberta government would finally listen and address all the concerns.

“We need politicians who recognize parental rights and religious freedom, and they need to be supported and prodded to stand up for those rights in the legislature. I hope citizens will not stop reminding them of their obligation to represent them and stand up for the rights of students and parents in all schools across the province.”

Chinese Albertan Zhang agreed. “Who else will think or act in the best interest of his or her kids other than his or her own parents? If we become the silent majority and do not defend the freedom and choices we enjoy today, the freedom that you are so used to will be no more one day.”

Photo Album from McDougall Centre in Calgary- from Victor Panlilio

Photo Album from the Alberta Legislature 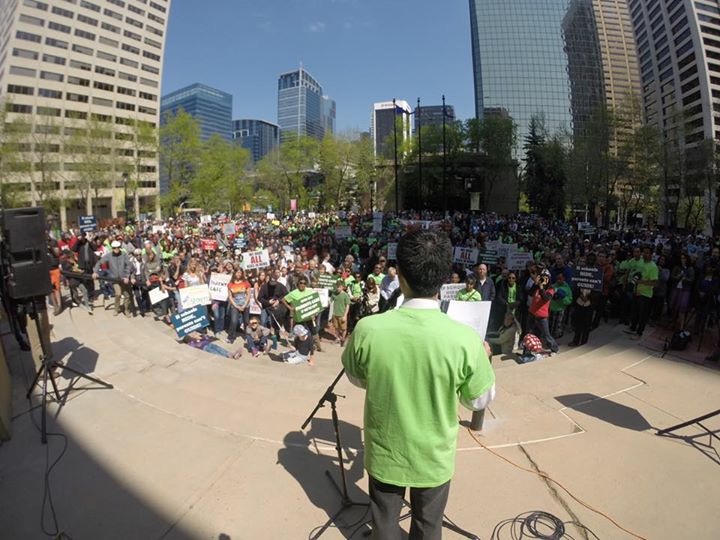