Posted by Parents for Choice in Education on November 03, 2016 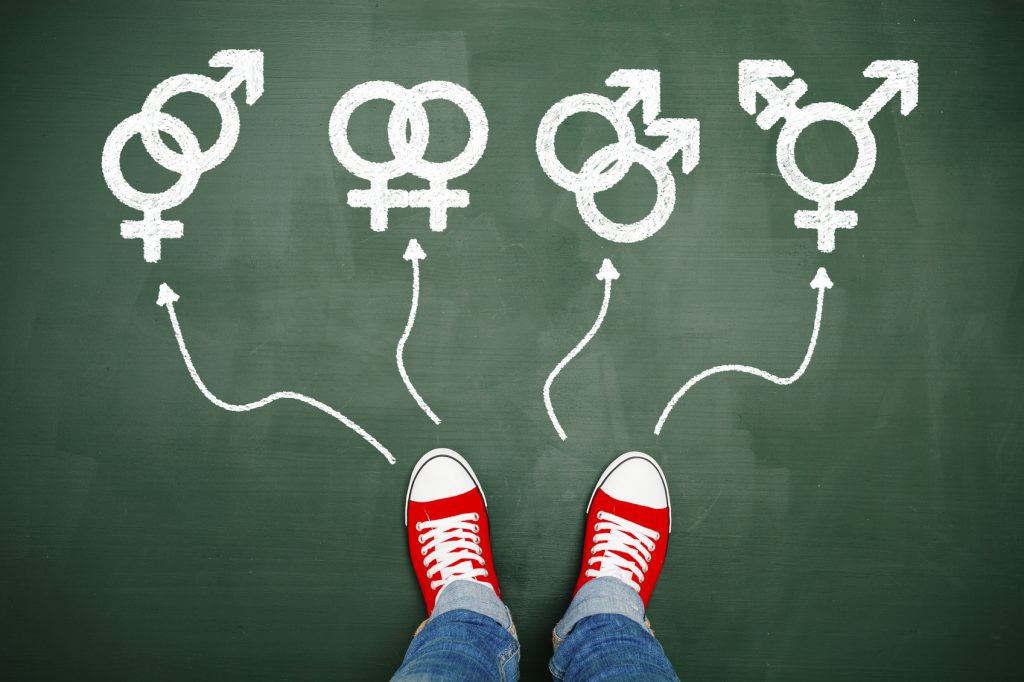 The Alberta Teachers’ Association (ATA), a union body that is supposed to support and represent all teachers across our pluralistic, multicultural province, has released a polarizing document for use in Alberta schools called the PRISM Toolkit Secondary Edition for grades 7-12.

Statements made in this document discriminate against many Alberta teachers, students and families by describing the binary belief in male and female perspectives on gender as "overly simplistic and often wrong", "misleading" and "exclusionary and harmful" (page 21), while imposing only one perspective on gender as fluid and subjective, as represented by the Gender Unicorn.

This controversial resource has garnered national and international attention.

How has the ATA responded?

In response to legitimate, respectful critiques of the PRISM Toolkit, both the ATA and their spokesperson have resorted to cyber bullying the courageous individuals who are speaking out on behalf of thousands of concerned citizens in Alberta.

In a November 1st CBC Radio interview with Mark Connolley on Edmonton AM, both Theresa Ng and a spokesperson for the ATA, Jonathan Teghtmeyer, were interviewed regarding the PRISM resource. Following the interview, the disrespectful comment below was re-tweeted by the ATA on social media in reference to Theresa Ng’s concerns:

The following day, Donna Trimble, Executive Director for Parents for Choice in Education (PCE), participated on a panel discussion regarding the PRISM resource on CBC Radio’s [email protected] in Calgary, in order to represent concerns voiced by the thousands of parents who are the grassroots of PCE.

Later that day, Jonathan Teghtmeyer, spokesperson for the ATA, showed a complete lack of professionalism by calling Donna Trimble out by name via Twitter, which encouraged many of his Twitter followers to do the same. 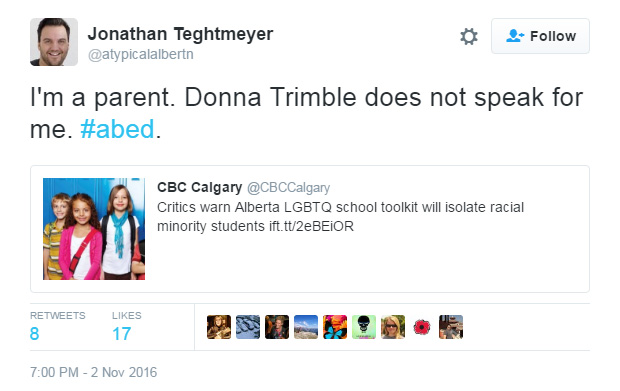 Furthermore, he also posted a tweet (that was swiftly removed) which equated the legitimate concerns of thousands of students and parents and many teachers with 'book burners'. 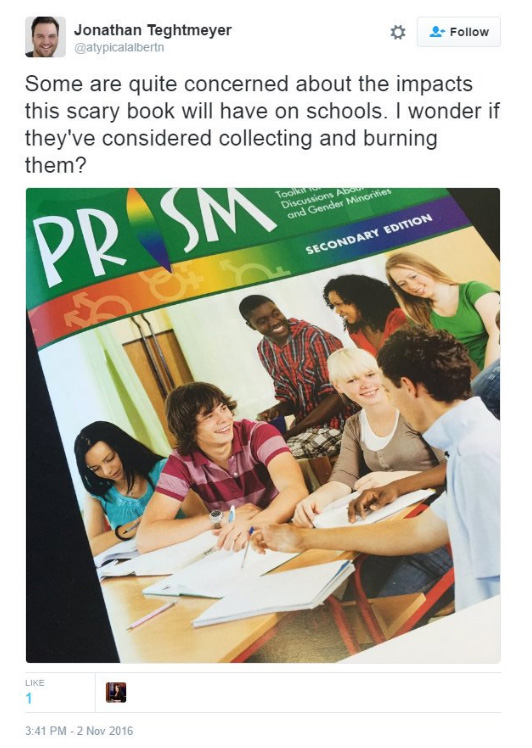 The content of this ATA resource, as well as their response to concerns, raises some serious questions about why this organization has been welcomed as a “full partner” with AB Education for the 6 year curriculum revamp.

Parents for Choice in Education has grave concerns regarding this partnership, especially when the Minister of Education, David Eggen, appears to support the same approach as the ATA, based on comments made in the Alberta Legislature on December 2, 2015:

Mr. Eggen: ...It’s very important, for example, when we have these LGBTQ issues and GSAs, to not just impose laws from above, from Edmonton, but to have it permeate through the education system because that’s, after all, the way people internalize values and the way that they act on them and are responsible for them as well...

… Mr. Eggen: Yes. Thanks, Mr. Speaker. I know that, certainly, the MLA asking is very involved in working with these issues. As I said before, I need all hands on deck to ensure that we do have a comprehensive sexual health education program embedded into the curriculum and then also infused throughout all of the things that we do here through the Legislature. Certainly, I am interested in working through this. It’ll be a process that involves moving ideas along a little bit, perhaps bumping up against some established values, but at the end it’s worth it for our children."

By allowing the PRISM Toolkit to be brought into schools, the Alberta Teachers' Association and Alberta Education are:

a) failing to present - and respect - alternative points of view

b) making judgement statements regarding certain views on gender identity

c) attempting to replace a school and teacher's supportive role to parents with a leading role whose goal is to "bump up against established values." This is in direct contradiction to the assurances in Alberta Education’s Guide to Implementation (page 82), which says:

d) failing to handle this controversial issue with respect and sensitivity.

How can parents feel their children are in safe, caring, welcoming and inclusive classrooms when the ATA has developed such a polarizing document, and then attacked, rather than engaged, citizens who express concern?

How can teachers who feel parents should know what is being taught, or teachers who have faith based perspectives themselves on marriage and gender, feel safe when they are represented by an Alberta Teacher's Association union body that has taken a clear stance against their conscience rights in the classroom?

The ATA should represent the diverse perspectives of the population of Alberta with balance and respect.

This document creates unsafe, uncaring and exclusive environments in school classrooms for any teacher who feels coerced into using this 'optional' material, as well as any student in a classroom where these lessons are imposed without the awareness of parents and in opposition to their own family values.

We all work and engage with fellow citizens in Alberta that have very different world views. In our everyday lives we do not insist that all our acquaintances, coworkers, friends or even family members agree with our world view in its entirety. We are able to show respect, build friendships and engage with others regardless of what may sometimes seem to be insurmountable differences.
It is essential that our students learn the art of agreeing to disagree, understanding that when someone has differing opinions than them on issues dear to their hearts, that this does not mean that there cannot be a deep sense of concern and respect for one another.

It is essential that we, the adults in Alberta, set an example by insisting that our classrooms have as much respect for our pluralistic, multicultural society as our work spaces and our communities are expected to.

This ATA PRISM Toolkit (secondary edition) fails to meet this measurement. If we do not teach and model for our children how to move past differences and still be respectful and inclusive to all, we risk the very stability of our multicultural and pluralistic province, and nation.

We want to give teachers, parents and children a voice.

PCE is calling out to teachers and parents to share your stories. We receive regular concerns about changes in school policies, presentations in school assemblies, and classroom discussions on controversial topics that parents were not aware would take place, that left their children in uncomfortable positions at school.

Unfortunately, this seems to be occurring more and more often.

Children are left distressed and confused, and some parents have gone so far as to bring their children home to school as a result of events in school or disturbing conversations with school staff and principals, some of whom support not informing parents of activities, discussions or counselling that is being offered to their children.

PCE will be compiling a list of occurrences children have faced in school, or parents have faced in communications with schools. We are looking for parents who have children across the spectrum from children with disabilities, to children that identify as sexual and gender minority students, to children of faith, and any others.

Your anonymity will be preserved if you so choose, but it would help if parents are willing to go public (so long as your child is not put at risk).

Please email Donna Trimble, Executive Director for PCE, at [email protected] so we can discuss your concerns. If possible, please send a summary.

In this present climate it has become very clear that a legally binding protocol for the notification and consent of parents in school MUST be implemented into legislation in order to ensure that all students have a safe, caring, respectful and inclusive education.