February in review – what have you missed?

Posted by Parents for Choice in Education on February 28, 2018 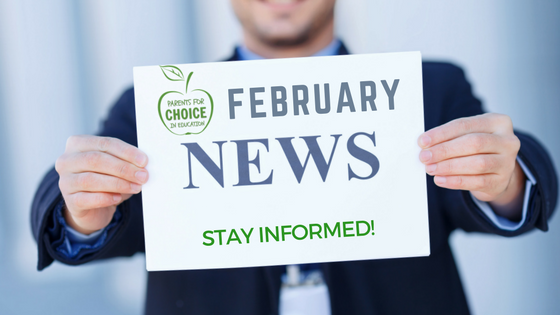 Here are 3 important highlights from our work over the past month:

1. PCE column in the Calgary Herald

In late February we confronted the most recent rhetoric calling for the defunding of independent schools by penning a column published in the Calgary Herald, as well as participating in a radio interview with Danielle Smith on News Talk 770.  Both are available on our blog “Stop targeting independent schools for public school budgeting problems”.

2. Who is teaching Alberta teachers?

When PCE supporters informed us that an Institute for Sexual Minority Studies and Services director was a keynote speaker for the Palliser District Teachers’ Convention on February 21, we e-mailed an alert to principals, trustees and parents, and also sent a message to the Alberta Teachers’ Association (ATA), in order to voice concerns on behalf of thousands of Albertans.

The ATA’s response only served to further undermine public confidence in Alberta's education system, as they expressed “confidence” in the “professionalism” of this keynote speaker who has repeatedly shared highly sexualized and discriminatory content on social media and demonstrated unprofessional public behavior. Thank you to LifeSite News and ARPA's Lighthouse News (listen at 1:58) for helping to raise awareness about this important information.

3. Making an impact in politics

You may recall that PCE published the first section of our “Make Change Happen” series in January, focused on making an impact in the political realm.  We are thrilled that a group of PCE supporters responded to that opportunity and worked together during the month of February to help develop and put forward strong policy proposals to the party in which they are members, advocating for an excellent quality-oriented, choice-driven education system which recognizes parental authority.

We need as many people as possible and it’s not too late to get involved – please sign-up here or use the buttons below to receive specialized updates on key opportunities related to policy development and the nomination process.

Do not underestimate the influence you gain when you get involved in a political party.

Politics is a numbers game and the more PCE supporters who have active memberships to political parties and get involved, the greater our impact.

As part of our monthly update we have included below a number of important education-related articles that were published recently.

How much funding private and public schools actually get in Alberta

“Alberta's education system is complicated, to begin with, and the ways we fund it add a whole other layer of complexity. But let's break it down, bit by bit, and look at answers to some of the most common questions.”  READ MORE

"The law and educational precedent in Alberta is clear. Parents have the right to make decisions regarding their children’s education and an education that fits within their family values and religious beliefs.”  READ MORE

If you value Catholic education, now is the time to speak up

Grandin Media, 02.20.2018, column by Dr. Donlevy, a Calgary lawyer and educator with expertise in constitutional law, research ethics, and educational leadership and governance.

"...King and others will repeat falsehoods, misrepresent facts, and make outrageous claims against Catholic education in an attempt to end its constitutional protection." READ MORE

Don’t treat all cases of gender dysphoria the same way

"Parents, teachers, and medical professionals have been told that 'affirming' a child who identifies as the opposite sex is the only acceptable approach....But it's not as simple as what we've been led to believe.” READ MORE

PCE Note: Unfortunately the government in Alberta is unwilling to acknowledge the complexity of children's needs. Through school district policies put in place from the Guidelines document, legislation enacted through Bills 10 & 24 and resources like the PRISM Toolkit, the government has imposed a "one-size-fits-all" solution that does not address the complexity of children's needs and, as the Globe & Mail article points out, is certainly not based on expert medical consensus.

PCE has long been advocating for a balanced, compassionate, family-focused approach to the care of vulnerable children that works to address the complexity of factors in each child's unique circumstance.

“School curriculum watchers want more emphasis on practical skills and ‘the basics’ of reading, writing and math, according to an Alberta Education survey.”

"Others said lessons in social justice didn’t belong in the music curriculum, or they didn’t understand how teachers would impart 'diverse cultural perspectives' in math classes." READ MORE