Posted by Parents for Choice in Education on February 23, 2018 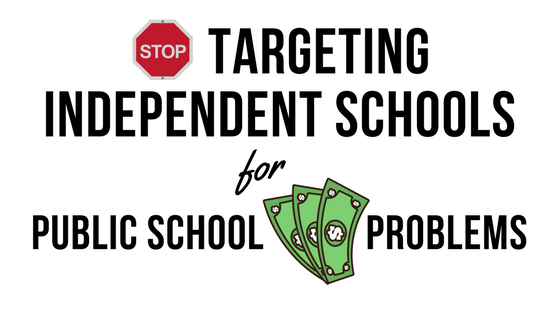 PCE works hard to advocate for excellence in education through maximum parental choice.

We have confronted the most recent rhetoric calling for the defunding of independent schools by penning the following column, published in the Calgary Herald, as well as participating in a radio interview with Danielle Smith on News Talk 770.

Feb 22, 2018 Calgary Herald Column: Public schools need to get their own system in order

A tale of woe regarding the calamity of poorly supported public schools was spun in a recent column written by Save Our Students (SOS), a public education advocacy group.

As pointed out by SOS, it is tragic and unfortunate that students in some schools do not have access to the fundraising capacity found in other communities.

Yet, the solution offered by SOS to defund private schools is no solution at all.

The question SOS should be asking is: Why do public schools continually struggle to support their own students despite the fact they receive taxpayer dollars totalling more than $10,000 per student?

In fact, these government subsidies total more than $2.4 billion per year, for Calgary and Edmonton public school boards alone.

SOS instead blames the lack of resources in some public schools on the significantly lower subsidies offered to independent schools, the majority of whom receive a mere $5,000 per student.

The ridiculous assumption that readers are supposed to take away is that such a change in Alberta’s education funding model would somehow magically make library books and other resources appear in struggling public schools.

This reminds one of an old Russian tale of a peasant living in poverty, who comes upon a bottle from which a genie appears and says, “I’m empowered to give you one wish.”

The peasant replies, “My family is poor. My neighbour has a goat. That goat gives good milk and that family has what it needs.”

The genie looks at the peasant and offers, “Do you want me to give you a goat?”

“No,” says the peasant, “I want you to kill my neighbour’s goat.”

The moral of the story? The request made by the peasant is envy-born and would result in only one thing: No goat for either peasant.

The same will be true of Alberta students and families if the government strips subsidies for independent schools, forcing many students back into public schools.

Ironically, the solution offered by SOS would actually create the very outcome they claim to want to prevent — a two-tier education system where only the wealthy can still afford school choice and no one else can.

SOS also fails to be honest about the savings to taxpayers, thanks to parents sending children to independent schools. Even Education Minister David Eggen has conceded that it would cost government coffers an extra $190 million per year just to cover the full cost of private and home school students at the same level as public school students.

As tempting as it may be, Albertans must resist the ploy of envy politics. It is a fool’s errand to try to improve one student’s education by stripping another student of theirs.

Defunding independent schools will do nothing to correct the budget issues persisting in public schools, nor solve the challenges endemic to schools in lower income neighbourhoods.

The solution for SOS and others concerned about the state of public education in Alberta is to stop hyper-focusing on stripping the dollars provided to their neighbours in the independent schools.

Instead, it is time for public school boards to ask themselves the difficult questions of how to better manage their own massive per student subsidies to ensure no student is left behind.

PDF printable version of the article