Posted by Parents for Choice in Education on July 02, 2018 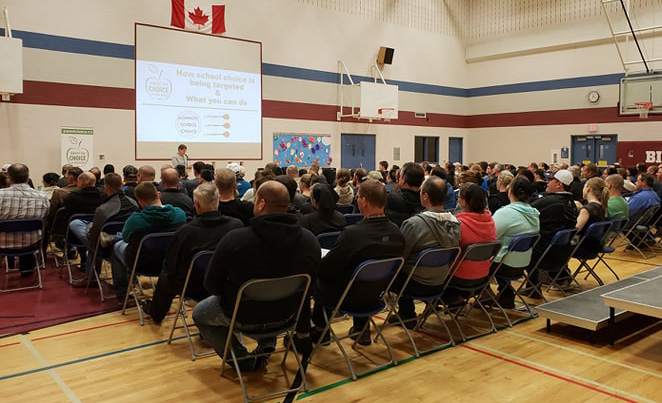 Another school year has drawn to a close and PCE continues to be strengthened by the tireless efforts of growing numbers of parents, grandparents and concerned citizens from across Alberta.

Below you will find a summary of important updates and education-related news from the month of June.

From our families to yours, we wish you a wonderful summer!

Thank you to individuals who took the initiative to organize, host and invite PCE to speak at several different events in June, including in Grande Prairie, La Crete, Peace River, Edmonton, Red Deer, Calgary and High River.

Thank you also to the newspaper in Grande Prairie who wrote an article about the successful event there and to the hundreds of citizens who invested time to attend these June events!

Thank you to those who attended the K-4 curriculum information sessions at the beginning of June, hosted by Alberta Education and the Alberta School Councils’ Association (ASCA).

We heard many concerns from people who attended these sessions, especially in regard to the secrecy of the draft curriculum documents.

One parent has shared her commentary and concerns online, which you can read here.

On June 20th, there was a hearing at the Court of Queen’s Bench in Medicine Hat.  Lawyers from the Justice Centre for Constitutional Freedoms (JCCF) requested an injunction to put a temporary hold on the new legislation from Bill 24 until a full hearing on the law’s constitutionality, expected in mid to late 2019.

One of the groups in attendance at the court hearing, “Concerned Parents of Alberta” wrote about their first-hand experience in the court room.

Lawyer John Carpay, president of JCCF, spoke to radio host Danielle Smith on June 28th, describing this Bill 24 injunction judgement as "one of the most shallow that [he's] ever read." (interview begins at the 3 min 15 sec mark)

Some schools participating on the Bill 24 court challenge have penned a public response to the injunction hearing, entitled “Civil Disobedience and Courageous Leadership by Alberta Schools”, which provides insight into the significant implications for their faith-based schools.

PCE wrote a blog “Court injunction dismissed: A call to action” which urges specific and important actions that you can take this summer.

We took time earlier this month to reflect on the many ways PCE has impacted the education landscape in Alberta during this 2017/18 school year.  It is an impressive list!

These successes would not have happened if not for the efforts, encouragement and financial contributions of our supporters.

We are so encouraged by the trust you have placed in PCE and thank you for partnering with us to advocate for an excellent, choice-driven, education system that recognizes parental authority!

A special thank you to each of the one-time and monthly donors who responded to our “Match-your-first-month” fundraising call-out earlier this month!

As a non-profit organization, PCE exists and operates entirely on donations from citizens.  To contribute to this important work and help strengthen our impact for the upcoming school year, you can donate here.

We cannot emphasize how important it is for PCE supporters to get involved in the political process NOW during the nomination process.

Throughout the summer and early fall, individuals across Alberta within each of the political parties are vying to earn coveted spots on the ballot during next year’s provincial election.

To learn a step-by-step process of how you can engage in the nomination process, including all important links, please refer to our recent blog “Court injunction dismissed: A call to action”.

For PCE supporters who are current members of any political party and want to learn more about how to be involved in the nomination process, please sign up here for specialized updates or click the button below.

As part of our monthly update we have included below a number of important education-related articles.

New program could be solution to math crisis in Alberta schools

"What is the crisis? In the past 20 years, international tests show Alberta’s percentage of top math students has dropped. More ominously, our percentages have doubled when it comes to students who lack a basic knowledge of math."  [READ MORE]

“Growing numbers of parents and teachers are concerned about the increasing ideological bent in Alberta’s education system, says Donna Trimble, executive director of Parents for Choice in Education, a non-profit advocacy group.

In a presentation last week at the Grande Prairie Public Library, Trimble said education policy makers and influencers are pushing to eliminate the range of education choices available for parents and funnel all students into an increasingly ideological public system. The small room was packed with about 75 people, including MLA hopefuls and trustees from GPPSD and charter schools, according to an organizer.”  [READ MORE]

LETTER: A reader speaks to choice in children’s education

“The funding of Catholic Schools, and other private schools, is the most appropriate allocation of tax revenue. We live in a pluralistic society: one size simply does not fit all.” [READ MORE]

“This legislation allows activists and special interest groups to have unvetted influence and access to some of our most vulnerable K-12 children in schools.

Meanwhile, parents are left in the dark, legally forbidden to know who is accessing their children at school and what information is being presented.

This is not good for kids.” [READ MORE]