Posted by Parents for Choice in Education on March 10, 2022 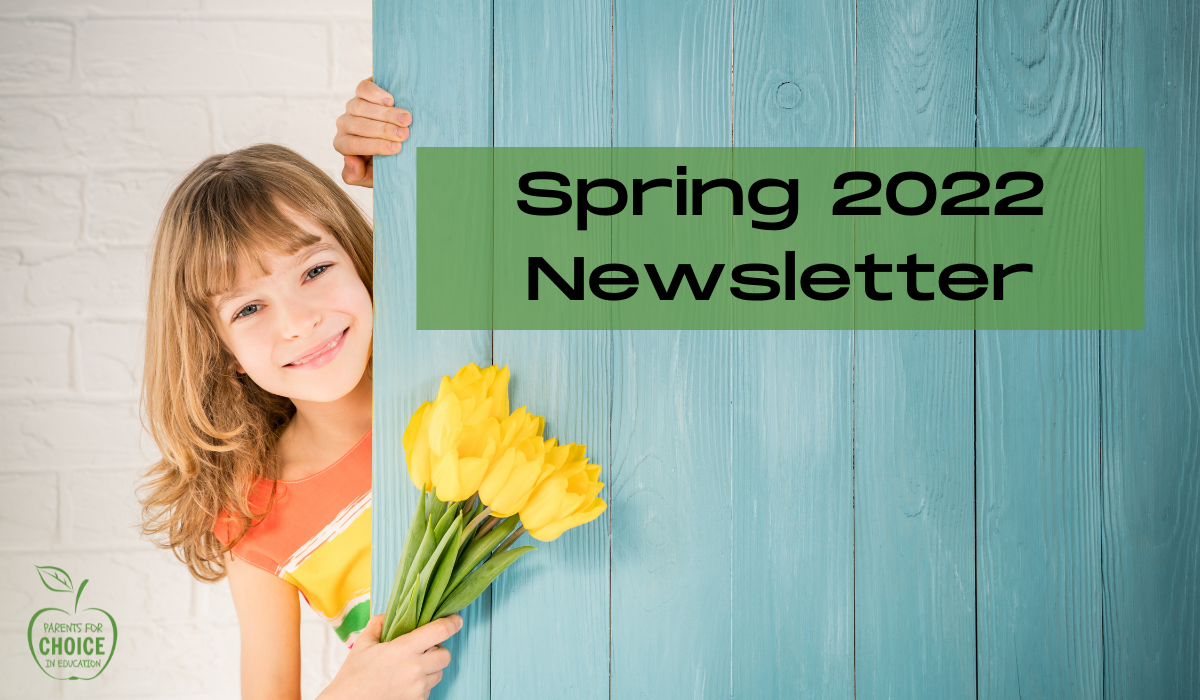 It's been a busy and exciting winter season for us.

We've been very active in advocacy, and our work has borne a lot of fruit.   Covid mandates are over at the provincial level, and there is lots of good news to report in growth of Charter and Independent schools, as well as homeschooling options.  There is still plenty to be done.

This past winter the Provincial Government made a major move, removing teacher discipline from the purview of the Alberta Teachers’ Association (ATA).  While this was framed as a response to the failure of ATA disciplinary boards to report criminal activity to the relevant authorities, it also has another purpose. It is a fairly straightforward response to the question of who decides what teachers’ mandates are – the union, or local parents?  Learn more from a recent article written by PCE’s Executive Director, John Hilton-O’Brien: Teacher Discipline in Context

PCE is excited to welcome Darlene Clarke to our board.  She is an excellent addition, having served as a Public School Board Trustee.  We look forward to incorporating her insights into discussions of choice within the public boards.  You can read her biography on PCE’s Board of Directors & Staff page.

We have also seen the retirement of the eminent scholar and administrator Stuart Wachowicz.  Stuart, who participated in the construction of a number of scholarly reports on PCE’s behalf, as well as offering sage advice on policy, will be greatly missed. We thank him for his years of service to the PCE Board.

PCE has been very active in advocacy over the winter.  PCE’s Executive Director, John Hilton-O’Brien, attended the Throne Speech as a guest of the Premier, Jason Kenney. This was followed by an “education roundtable” with the Premier, during which John raised the serious funding issues created by the “Weighted Moving Average” that the government is currently using to disburse funding to schools. This upcoming week, PCE’s Board looks forward to attending a meeting with the Premier and Education Minister regarding home education.

John appreciated the opportunity to address a policy meeting of the Wildrose Independence Party in late February. In May 2022, John is excited to represent Parents for Choice in Education at the What’s Next in Education Forum: Getting Beyond Markets and Choice at the Canada Strong and Free’s (formerly known as the Manning Centre) conference in Ottawa.

In addition to meetings and events, PCE has continued to focus on researching and writing articles. PCE’s primary project right now is preparing a comprehensive report on the province’s Weighted Moving Average (WMA) funding model. Under the WMA, half of a school’s funding comes from the current year, 30% from the past year, and 20% from the previous year.

The WMA punishes growth harshly.  This is no more apparent than in the case of independent schools, which grew by 20% last year.  An independent school is supposed to receive 70% of the funding of a public school.  However, if growth for such a school stays constant at the average 20%, the WMA gives it only 50% of the funding of a public school. The story is repeated across charter and successful growing public schools, though less dramatically.  This means that a successful school – the kind you want to enroll your kids in – will always be asking itself if it can afford to take your child.  That is also part of the reason there is a waiting list of 15,000 children for charter schools.

To help support PCE to develop this comprehensive report – much needed in order to bring out full understanding of the problems of the WMA  along with potential solutions –  please consider providing a one-time or monthly donation.

Some good news on the home education front, as reported by the Alberta Home Education Association (AHEA), is that the government has agreed to provide special needs support to home educators.  In the past, parents with special needs children who were choosing to homeschool were told they had to have their children in the public system to access the same therapies that students in the public system have access to; otherwise they had to pay for the therapies out of pocket.

AHEA is also doing a speaker’s series on parental choice – you can get more information and sign up here.

The End of Mask and Vaccine Mandates

It’s been a season of protests, with the looming threat of government coercion, including the protest on Parliament Hill by truck drivers, border blockades, and thousands of people in the streets demanding an end to mask and vaccine mandates.

Given the polarization of views, it might be reasonable to make room for choice on the issue.  A new school in Ontario, for instance, appears to cater primarily to those who wish to reduce restrictions. A similar program in Calgary or Edmonton might be a school which is more attentive to medical issues, catering to students and families with medical concerns. Such a program raises the spectre of medical segregation.  Nonetheless, if such a solution was truly a parent-driven initiative, it may be worth a look. Parents should always be able to choose!

A word is due regarding the political theatre surrounding Covid.  As usual, political actors on all sides are using a crisis to drum up support and advance their own agendas.

The United Conservative Party hopes to gain support by ending restrictions early.  They are trying to spin public anger about the Covid restrictions they themselves implemented into anger with their opponents, who still advocate for restrictions (for the moment, at least). The choice was probably guided by their admittedly excellent regular polling data, rather than any genuine conviction.

On the other side, Alberta’s New Democratic Party attempts to exploit the fear and anger of those honestly concerned about ending Covid restrictions. Protests organized by “Support Our Students” in conjunction with groups like “Socialist Fightback Alberta” or “Students Against Kenney,” accompanied by NDP MLAs, leave no illusions. The left-wing protests are politically organized, and are clearly not grassroots movements – just an attempt to manipulate the news cycle.

While real concerns underlie both sides of the debate, it is hard to tell which set of politicians are more cynical.  As a result, we predict further theatre over mask and vaccine mandates at school.

As a parent, you can write to your local school board, and tell them how you feel about Covid measures.  You can also vote with your feet, to join the growing number of families using educational options that honour the direction parents deem best for their children going forward. Home education has doubled, new Charter schools have been founded, and independent school enrollment is up by 20%. The route to real peace on the issue is found in school choice – perhaps with independent or charter schools, home education, or programs of choice within the public, francophone or separate school systems.

Speaking of underlying social movements, enrollment in independent, charter and separate schools, as well as home education, has grown during Covid. As mentioned above, there is a reported waiting list of 15,000 students for charter schools.  Additionally, three new charter schools are being opened – New Humble, Calgary STEM Academy, and Calgary Classical Academy.

As a result of this growth, the government has announced some new funding for Charter schools.  Interestingly, it looks like some of this support may be for facilities – which seems to be a reasonable response to the charter schools’ waiting list.  The numbers remain modest: $25 million out of a total education operating budget of over $8 billion is not very significant.  As Charter students are 1.5% of the total student population of Alberta, one would expect them to have a budget closer to $125 million – in addition, much of the vast public school capital is hidden in the Alberta Infrastructure budget.  You can expect us to be producing an essay on these types of inequities in the next week or so.

Predictably, the usual suspects have been frothing at the mouth over the perceived affront to public education, in spite of the old political adage that one should never punch down. These are the same people that PCE has debunked in the past over whether independent schools cost public boards money, and are affiliated with those who wish to deny Catholics the ability to educate their children in their own faith.

The government is not really going in a new direction here.  Instead, it is simply responding to a social movement that is already in play.  Our independent and charter schools have been growing in spite of the government, not because of it. In jurisdictions where they are allowed to, parents have been abandoning the public systems in droves.  South of the border, elections have been won over school choice, and school boards have been recalled.  Parents are a political and economic force to be reckoned with: the government is just acknowledging reality.

The new Alberta Curriculum is going to be implemented carefully

We are pleased to see that the government has decided to stagger its implementation of the new curriculum. We mentioned teacher preparation as being a key concern in an article published this time last year, and our Executive Director recommended staggering the curriculum in a private meeting at that time.

CTV article on the budget and charter schools

How the Left Betrayed the Truckers

PCE’s report on how independent schools save us money

Last September, the US National School Board’s Association sent a letter to the President of the United States, which suggested that protesting parents could be categorized as “domestic terrorists.”  See Page 2 for the “terrorist” comment.