Posted by Parents for Choice in Education on May 09, 2018

We are excited to share several successes, as well clear up some inaccuracies, that took place this past weekend at the United Conservative Party (UCP) Founding Convention/AGM in Red Deer.

Parents for Choice in Education (PCE) welcomes the opportunity to work with any politician or political party who is willing to partner with us as we advocate for excellence in education through maximum parental choice.

PCE’s exhibit booth in the Convention hallway was very well-attended.

In the first two days there was a constant gathering of people at our table saying hello, expressing their thanks or learning more about our work.

Barely a moment went by without visitors and we enjoyed all the positive conversations.

It was wonderful being able to meet many PCE supporters in-person. We also added numerous new names to our list.

Our booth was also an excellent way to connect with those in UCP leadership. We appreciated  conversations with several MLAs and Board Executive candidates. 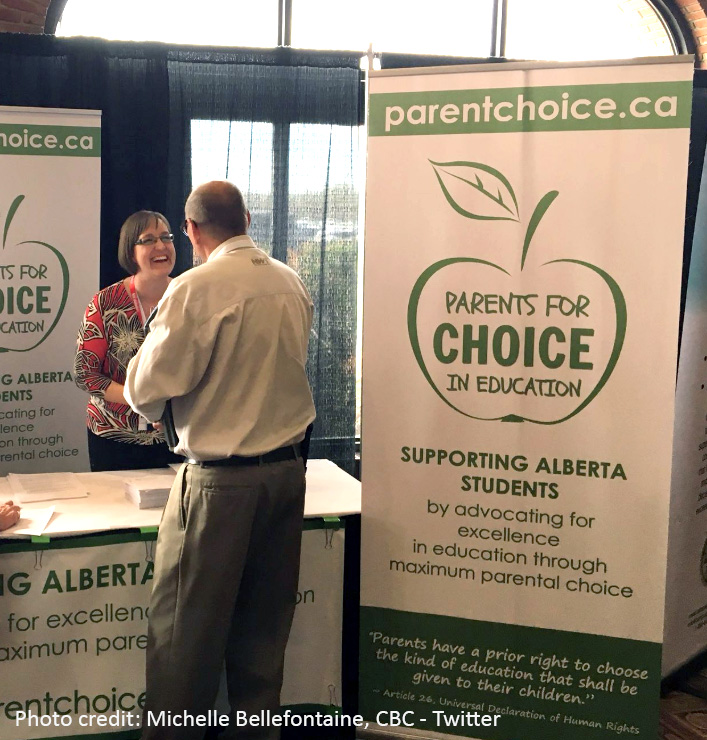 Early in 2018 we surveyed our membership to discern those who had memberships in political parties and were interested in policy development.

When the UCP sent instructions for developing policy, we were ready.  We invited PCE supporters with UCP memberships to contribute to writing strong school choice, family-oriented policies.

Over the next 4 months, through several different stages, hundreds of supporters participated to ensure that these strong school choice resolutions continued to move forward through the process.

As a result, 11 of these resolutions were included in the final list of 250 brought forward to the AGM floor on Sunday May 6th and eight of those made it to the voting stage within the timeframe available that day.

Each one of those 8 resolutions were ratified by UCP members at the Convention with overwhelming support, ranging from 74%-96% approval!

Many were impressed by the consensus and high levels of support for these school choice, family-oriented resolutions.

For anyone attending the AGM it was obvious that education was a key priority for grassroots members, including Saturday evening when the loudest and longest applause was when Jason Kenney talked about the curriculum re-write.

THANK YOU to each and every person who contributed each step of the way to ensure that these excellent resolutions will now be considered as important input to formulate the UCP platform going forward.

For many of our supporters, this was their first time ever at a political convention/AGM.  When we asked many of them afterwards, they were excited to say that they enjoyed the weekend and found it quite interesting.

We remind you that those who engage in the political process have a much greater influence on governance in Alberta. We are so pleased to see our supporters now actively impacting the priorities and direction of education going forward, with a focus on choice and families.

PCE organized a supper appreciation event for those attending the AGM who registered through our “Count us in” button on our website that they would be at the convention.

On Saturday evening we had an excellent opportunity to gather together with other like-minded people from across the province to network and hear a special presentation by Donna Trimble, Executive Director of PCE.

One resolution has taken the media spotlight across the province.

While headlines and soundbites claim this resolution was about GSAs, the resolution itself is actually focused on provision of sexual and religious content and resources to K-12 students:

“Reinstate parental opt-in consent for any subjects of a religious or sexual nature, including enrollment in extracurricular activities/clubs or distribution of any instructional materials/resources related to these topics”

While it is not a resolution we penned, we feel it is important to clarify a few key points.

A) WORDING OF ACTUAL RESOLUTION FOCUSES ON SEXUAL/RELIGIOUS CONTENT

This resolution has been turned into something it was never about, due largely to the inaccurate remarks of three MLAs at the AGM who falsely conflated it with GSAs which led to a media frenzy amplifying those comments and further mischaracterizing this resolution.

We've been re-assured time and time again that GSAs are only social peer-support groups.

If so, then Resolution 30 would not even apply, as it focuses solely on sexual/religious content.

On Theresa Ng’s personal blog she shares complaints she filed with CTV and the Canadian Press in order to help set the record straight.

B) GROWING WIDESPREAD CONCERNS OF ALBERTANS

Anyone who has been following PCE for any length of time knows the deep concerns citizens and parents have regarding:

These concerns are especially serious and legitimate because the very same organization who provided links directing K-12 children to this sexually graphic material had representatives standing directly behind the Education Minister at his press conference announcing Bill 24, legislation which includes a special exemption to allow sexual content in K-12 clubs.

On a positive note, what this controversy has unexpectedly allowed us to do is to open a positive dialogue with the group LGBTory and we are discovering that we share common ground when it comes to these issues.

We encourage you to listen to the first 10 minutes of Monday’s CBC Alberta @ Noon interview with Harrison Fleming, Alberta regional coordinator of LGBTory, where he mentions the important dialogue that we have started.

Another unfortunate misrepresentation of the weekend is the media’s portrayal of Jason Kenney’s response to the controversy surrounding Resolution 30 which has suggested he may not honour the hard work of his grassroots membership or the priorities they brought forward in the policy resolutions brought to the floor.

Donna Trimble was present at the press conference where Jason Kenney made it very clear, on more than one occasion, where he stood on this issue.

“I think this was a badly worded resolution. I didn't hear the debate, but I think there are, parents do have some legitimate concerns about content primarily or explicitly dealing with religion or human sexuality being taught without their knowledge or consent.”

“We oppose mandatory notification membership in gay-straight alliances or other peer groups. We don't think, however, it's prudent to completely exclude the possibility that an educator thinks it's in the best interest of the kids to engage parents. If a kid's facing, a young child is facing terrible bullying and they need parental support, a principal might decide it's in the best interest of the child to engage. I would refer you back to the statement I gave about that I think on November the 2nd.

Not a word of that has changed. We think that is the moderate centrist position. Our public opinion research suggests that reflects the overwhelming consensus of Albertans who are not completely polarized on these debates. They want safe, caring spaces for kids, especially those who might be struggling with issues around sexuality. They understand that those should be generally confidential, but there might be some exceptional circumstances where educators decide that parents can help their kids.

Where do we go from here?

We have proven through our efforts that PCE can effectively inform, engage and mobilize people to make an impact in the political realm.

Thank you to each one of you, our supporters, who helped contribute to that success.

Ultimately, it is this proactive grunt work of getting involved at the grassroots level that contributes to real change.

We remind everyone to continue to persevere, get involved and make your voices heard in order to make an impact.