Posted by Parents for Choice in Education on April 04, 2017

The Legislature Stands United Once More

Brian Jean, our Wildrose opposition leader in the Legislature, has officially stated his agreement with the NDP Education Minister David Eggen, that it is ‘not appropriate’ to tell parents when kids join Gay-Straight Alliances (GSAs) in schools.

In doing so, the MLAs in the legislature continue to support secrecy over communication, and the narrowing of supports for at-risk youth, regardless of the danger this entails.

It is likely that iSMSS (Institute for Sexual Minority Studies and Services), the individuals responsible for this inappropriate material, are still key consultants with Alberta Education and (most likely) the secretive curriculum re-write. The University of Alberta, where iSMSS is located has offered no apology for the lack of professional oversight iSMSS provided to the Alberta GSA Network.

Thank you to Leela Aheer, the Wildrose Education Critic, who has taken up the gauntlet to advocate for the safety of children, questioning Minister Eggen yesterday in the Legislature. We hope to see more MLAs step up to ensure someone is held accountable for violating the trust of Albertans and endangering the safety of children.

It is unbelievable that these resources and community support links were made available to K-12 children from the provincial GSA “experts”, yet Brian Jean, the Minister of Education and other MLAs have the gall to falsely and audaciously accuse parents of being the greater danger to these vulnerable youth.

It is essential parents and concerned citizens challenge the false rhetoric of our politicians and remind them who is legally responsible for the children of this province. Consider the following sections of the Family Law Act  (excerpts taken from s. 19, 20 & 21) that are being conveniently ignored by our elected representatives.

19(1) Every child is subject to guardianship.

(6) A court may, on application by a parent of a child, a guardian of a child or a child, or on its own motion in a proceeding under this Act or the Child, Youth and Family Enhancement Act, make a determination that a parent meets or does not meet the requirements to be a guardian under subsection (2).

(4) Except where otherwise limited by a parenting order, each guardian is entitled

(a)  to be informed of and consulted about and to make all significant decisions affecting the child in the exercise of the powers and responsibilities of guardianship described in subsection (5), and

(b)  to have sufficient contact with the child to carry out those powers and responsibilities.

(5) Except where otherwise limited by law, including a parenting order, each guardian has the following responsibilities in respect of the child:

(a) to nurture the child’s physical, psychological and emotional development and to guide the child towards independent adulthood;

(6) Except where otherwise limited by law, including a parenting order, each guardian may exercise the following powers:

(c)  to make decisions about the child’s education, including the nature, extent and place of education and any participation in extracurricular school activities;

(d)  to make decisions regarding the child’s cultural, linguistic, religious and spiritual upbringing and heritage;

(g)  to consent to medical, dental and other health-related treatment for the child;

(h)  to grant or refuse consent where consent of a parent or guardian is required by law in any application, approval, action, proceeding or other matter;

(i)  to receive and respond to any notice that a parent or guardian is entitled or required by law to receive;

(l) to receive from third parties health, education or other information that may significantly affect the child;

(m) to exercise any other powers reasonably necessary to carry out the responsibilities of guardianship. Indeed, we live in a profoundly troubling times. We must demand that our government uphold the rights of guardians and parents to care for their own children, as protected by the Family Law Act.

Research demonstrates why the Family Law Act was implemented to begin with. Vulnerable children, according to the Trans Pulse Survey and other research, have significantly improved outcomes when parents and families are engaged and supportive.

We face a unique situation in Alberta in which an absence of a protocol for parental engagement has led to the coercion of educators in schools to circumvent parents.

If we are serious about setting these youth up for success then supporting youth as they engage in difficult conversations must be a priority.

We must make parent notification key and ensure that communication and expansion of support systems – not secrecy and isolation – are the ultimate goals. Any time we allow one-on-one conversations between adults and children then we allow an avenue for neglectful care at a minimum (narrowing of supports) and abuse of authority at its worst.

Oversight and measures of accountability should always be in place.

But there is a greater danger posed by Wildrose Leader Brian Jean demonstrating such weakness on this portfolio in the Legislature.

When the opposition in the Legislature fails to stand up to protect families from state control of their own children, Minister Eggen and the NDP are empowered to expand that state control.

Minister Eggen has now informed the public that he “is considering” codifying into law the circumvention of parents in the care of their own children at school.

In the interim, Minister Eggen has issued a new edict.

Yesterday, he wrote to every single school board in the province of Alberta demanding that “such notification (of parents) should not occur.”

None other than the Director of iSMSS, the very organization that failed to vet the resources on the Alberta GSA Network and allowed students as young as five to access sexually graphic material for months, touted Minister Eggen’s message: 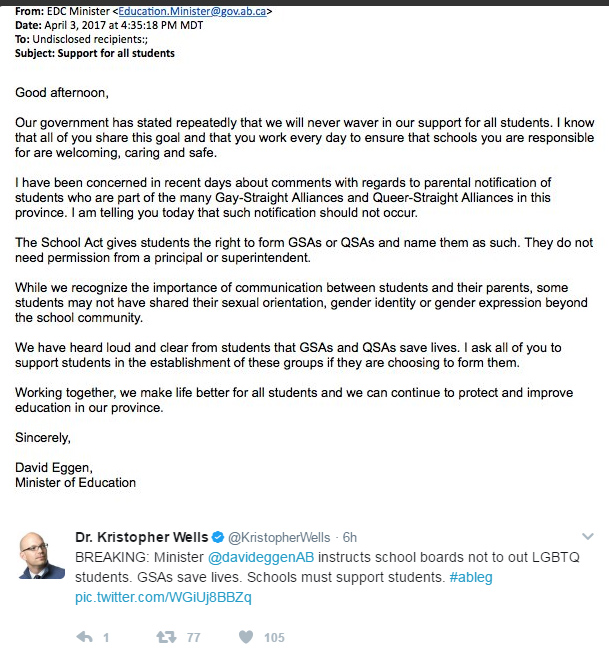 When Minister Eggen first offered the Guidelines for Best Practices to schools in January of last year, upon which to develop new policies, I wrote:

Who will be to blame if children are lost? The parents, because they put their faith in the authorities and were unaware they were being kept ignorant of their child’s needs? The teacher and school that hid the child’s struggles from the child’s parents? Or the Alberta Government who voted anti-family Bill 10 into law, and followed up with such a dangerous guideline to isolate children from their parents?

Parents for Choice in Education (PCE) calls upon all concerned citizens of Alberta. We say enough is enough. Common sense must be returned to our schools.

No teacher (a population already overburdened with a multitude of responsibilities) should be coerced by school policies and the likes of iSMSS to engage in secretive one-on-one conversations with at-risk youth on subjects of a sexual nature.

PCE has consistently asked that legislation be amended to ensure that children are supported to communicate with their parents and work with administrators and teachers within their local schools, to ensure clubs effectively meet the needs of children, are cohesive to the foundation of the school and expand, rather than dangerously narrow, each student’s sources of support.

It is time for loving parents across our province to rise up and engage!

1. Contact Brian Jean and remind him that his job is to represent you, the good families of Alberta, and not the rhetoric of iSMSS and the NDP! Ask that he clarifies or retracts his statement regarding the circumvention of parents (phone: 780.427.1031 and [email protected])

2. ‘Parental Consent is Key’ – Please sign the online open letter and demand a regulatory process for the consent and notification of parents in school when sensitive materials and counselling are offered to your children.

3. PARENT REQUEST FOR NOTIFICATION – Print and deliver to your child’s school.

To the Minister of Education David Eggen:

Will you assure Alberta parents and taxpayers that iSMSS, along with any associated staff and Directors, are no longer involved in any capacity with the K-12 curriculum re-write or the provision of resources, research or teacher training that is being funded by the Alberta government?

5. Which Politicians Will Stand Up for Our Children? – There are many unanswered questions and we need to contact our elected representatives and urge them to take a strong stand on this issue.

6. DONATE – In the absence of responsible media willing to spread this important story, we need to be our own clarion call. Please donate to allow PCE to purchase advertising space on billboards, radio and TV to inform parents of the risks their children face in Alberta schools through current policies, legislation and resources.

Remember: Family is the Foundation of a Free Society

No government should be permitted by its electorate to chip away at the parent-child bond, especially when it is that bond that is essential to the care and safety of their precious children.

It is time for the citizens of Alberta to stand up and protect our most vulnerable youth. In so doing we protect the weakest among us, we strengthen the integrity of Alberta families and we empower our free society on the whole.

Go to www.parentchoice.ca to engage!

Thank you to the many concerned PCE grassroots supporters! You rose up! You made calls! You wrote letters and sent messages! And it appears Brian Jean is reconsidering his stance on parent notification in schools. PCE hopes the Wildrose opposition will stand strong for families and children going forward.

Brian Jean expanded on his position on GSAs in Alberta in a Facebook note.  We are especially pleased Brian Jean clarified that,

"As the School Act recognizes, and Wildrose fully supports, parents have the right and responsibility to be active partners in their child’s education outside of the home, and by law, consent must be sought for instruction dealing with issues surrounding religion or human sexuality."

He also reminded all that, "GSAs are supposed to be peer-support groups, initiated and driven by the students, not the state. Parents need to be assured that GSAs are not being used to get around the legal requirement to obtain parental consent when discussing issues of human sexuality."

This is an important statement in light of the sexually graphic material that has been available to K-12 Alberta students via the Alberta GSA Network for months.

Brian Jean has once more appeared to change his position on GSAs, as explained in a Calgary Sun Column.

Brian Jean has returned to his original statement: “I’m here today telling you for certain what my position is and my personal opinion is, we shouldn’t out kids."

We at Parents for Choice in Education ask the same thing.

*Donna Trimble, Executive Director of Parents for Choice in Education was honoured to co-author this article with Theresa Ng of Informed Albertans.