Posted by Parents for Choice in Education on January 01, 2019 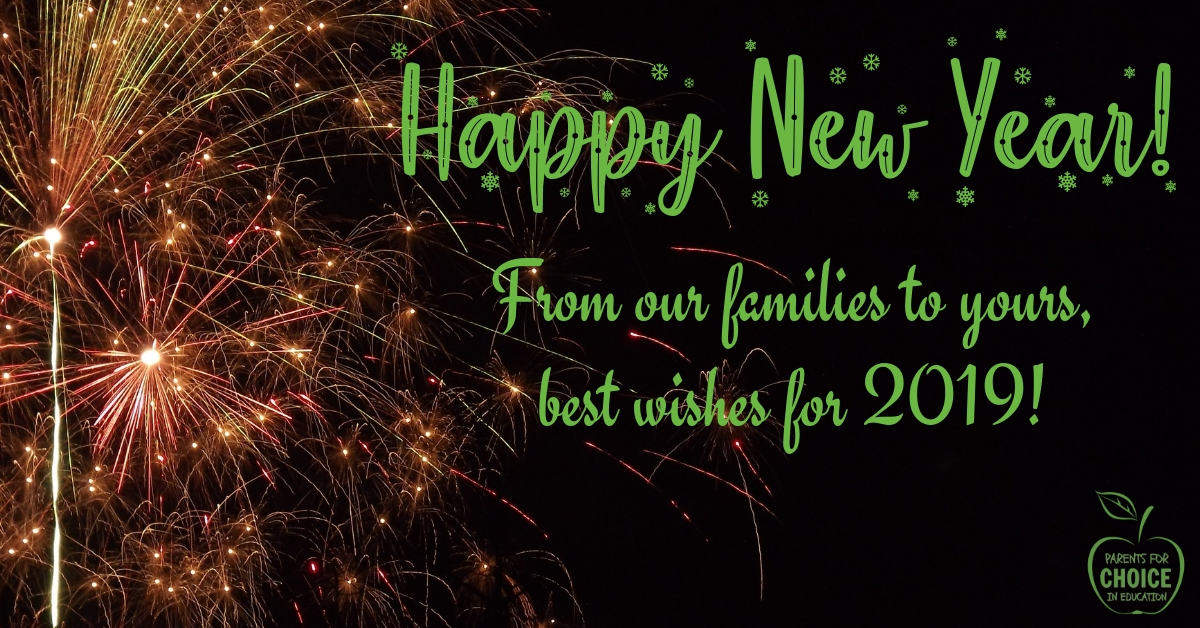 Thank you for your support this past year which has helped increase the impact of Parents for Choice in Education (PCE) as a vital voice in Alberta’s public sphere.

We wish you all a joyous 2019 and look forward to continuing to work together toward the highest standards of quality and care for all students in our K-12 education system! 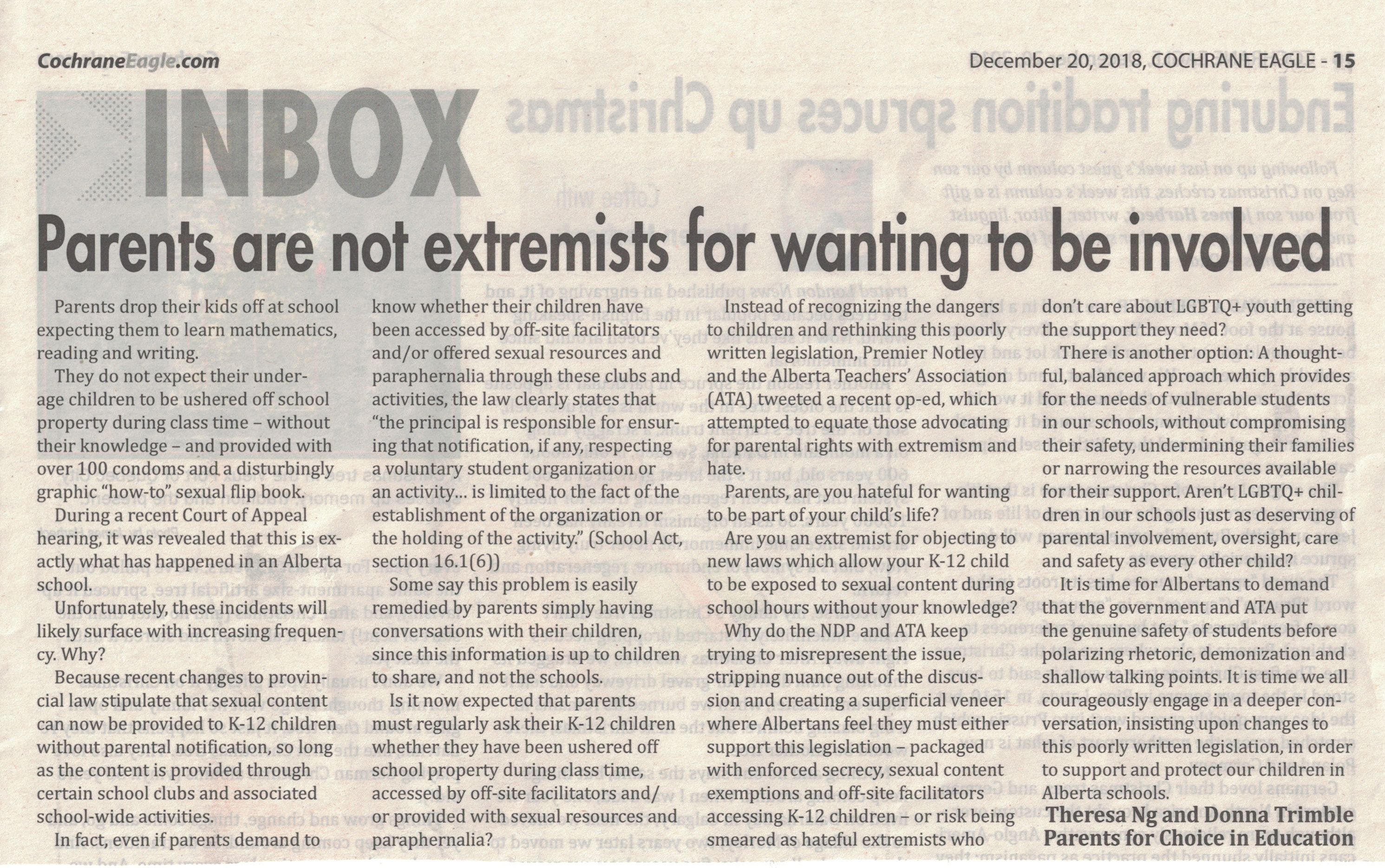 Thank you to the Lethbridge Herald and Cochrane Eagle for publishing the following opinion column written by Parents for Choice in Education this past month.

Parents drop their kids off at school expecting them to learn mathematics, reading and writing.

They do not expect their underage children to be ushered off school property during class time - without their knowledge - and provided with over 100 condoms and a disturbingly graphic ‘how-to’ sexual flip book.

During a recent Court of Appeal hearing, it was revealed that this is exactly what has happened in an Alberta school.

Unfortunately, these incidents will likely surface with increasing frequency.

Because recent changes to provincial law stipulate that sexual content can now be provided to K-12 children without parental notification, so long as the content is provided through certain school clubs and associated school-wide activities.

In fact, even if parents demand to know whether their children have been accessed by off-site facilitators and/or offered sexual resources and paraphernalia through these clubs and activities, the law clearly states that “the principal is responsible for ensuring that notification, if any, respecting a voluntary student organization or an activity… is limited to the fact of the establishment of the organization or the holding of the activity.” (School Act, section 16.1(6))

Some say this problem is easily remedied by parents simply having conversations with their children, since this information is up to children to share, and not the schools.

Is it now expected that parents must regularly ask their K-12 children whether they have been ushered off school property during class time, accessed by off-site facilitators and/or provided with sexual resources and paraphernalia?

Instead of recognizing the dangers to children and rethinking this poorly-written legislation, Premier Notley and the Alberta Teachers’ Association (ATA) tweeted a recent op-ed, which attempted to equate those advocating for parental rights with extremism and hate.

Parents, are you hateful for wanting to be part of your child’s life?

Are you an extremist for objecting to new laws which allow your K-12 child to be exposed to sexual content during school hours without your knowledge?

Why do the NDP and ATA keep trying to misrepresent the issue, stripping nuance out of the discussion and creating a superficial veneer where Albertans feel they must either support this legislation - packaged with enforced secrecy, sexual content exemptions and off-site facilitators accessing K-12 children - or risk being smeared as hateful extremists who don’t care about LGBTQ+ youth getting the support they need?

There is another option: A thoughtful, balanced approach which provides for the needs of vulnerable students in our schools, without compromising their safety, undermining their families or narrowing the resources available for their support.

Aren’t LGBTQ+ children in our schools just as deserving of parental involvement, oversight, care and safety as every other child?

It is time for Albertans to demand that the government and ATA put the genuine safety of students before polarizing rhetoric, demonization and shallow talking points.

It is time we all courageously engage in a deeper conversation, insisting upon changes to this poorly-written legislation, in order to support and protect our children in Alberta schools. 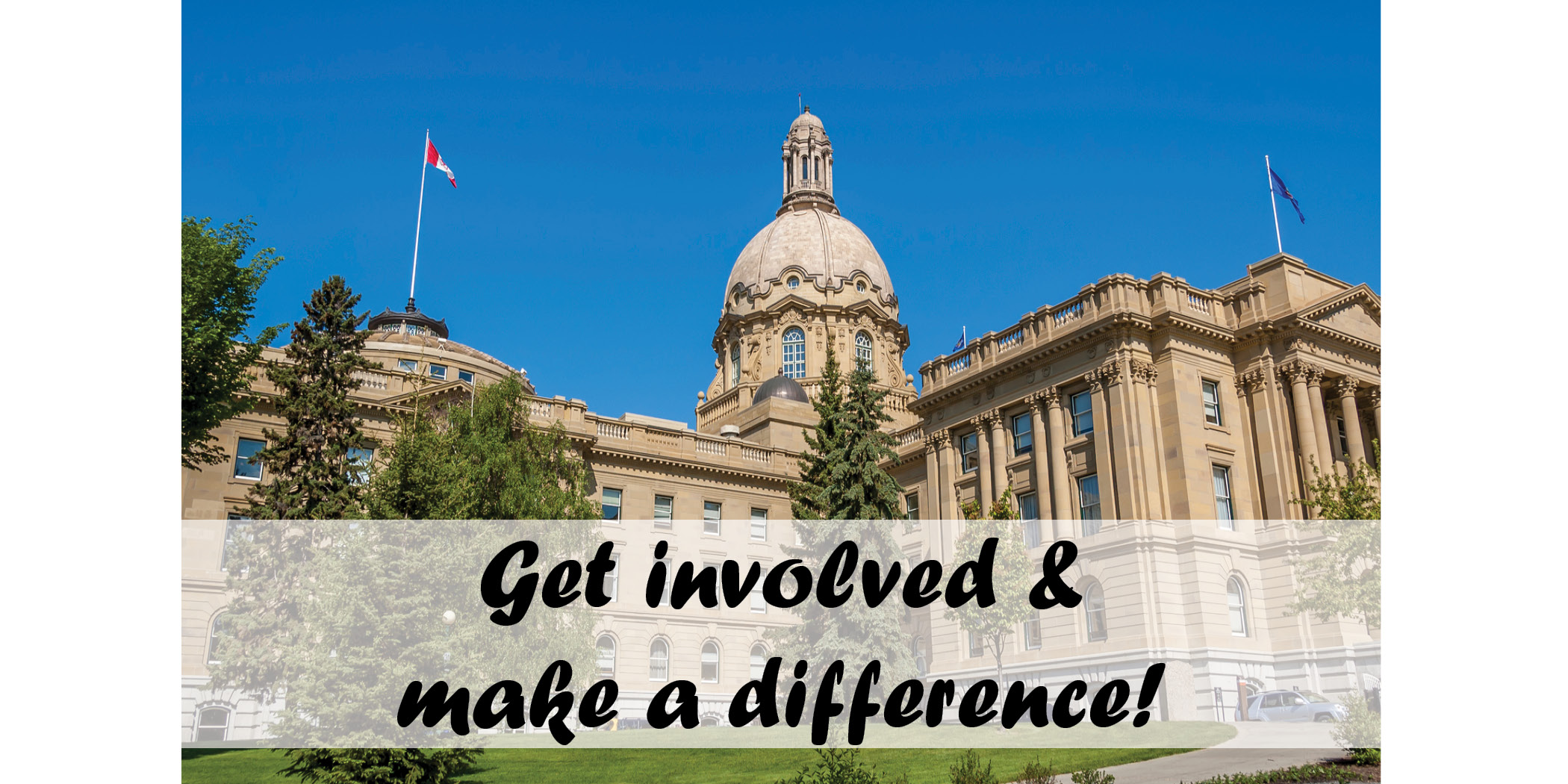 2. Opportunity to get involved!

There are 87 Members of the Legislative Assembly (MLAs) responsible for deciding and passing the laws that govern our province - one MLA for each of the 87 electoral districts in Alberta.

With a provincial election anticipated in 2019 we have an essential opportunity to choose the new group of 87 people who will create, change and pass laws going forward, including the laws governing our K-12 education system.

As we prepare for an election to be called, PCE is looking for several committed citizens within each of the 87 constituencies who will support PCE’s advocacy work as we aim to collect and disseminate important election information to our supporters within each area.

For those interested in contributing, please click here or on the button below and we will be in touch with you within the next couple weeks. Thank you!

3. Ever encountered these excuses?  Know how to respond.

Perhaps you’ve encountered some of the following excuses regarding changes to law from Bill 10 and 24:

Learn how to respond effectively and factually to these common excuses and several others through Part C of our Toolkit resource.

In order to respond to common excuses and educate others, including on social media, feel free to copy and paste quotes from the PCE Toolkit and include a reference link directly to the Toolkit. 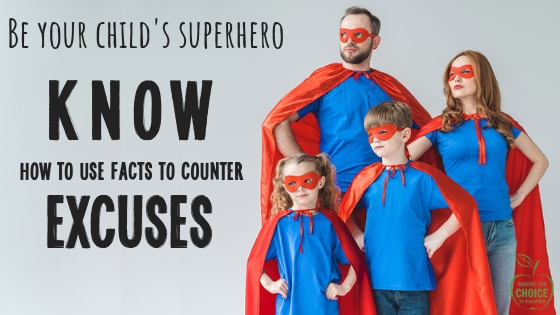 “What we’re talking about here is that this [sexually graphic material and 100+ condoms] was found by a mother who had no idea her son missed an entire day of school to go to a Gay Straight Alliance conference. He was taken off of school grounds. The only way she found out was she found these materials in his room when she was cleaning his room.”  [LISTEN HERE]

Opinion: Keep Catholic schools for the sake of students

"Catholic schools in Alberta have consistently been places where students are nurtured into success. Publicly available statistics show that Catholic schools produce higher test scores, high-school completion rates, and levels of parental involvement than their public counterparts... So why would we want to shut them down and deprive families of these advantages?"  [READ MORE]

“Alberta’s new curriculum for the early grades will be tested in classrooms across the province beginning next September, Education Minister David Eggen said.

If testing goes smoothly, a new kindergarten-to-Grade 4 curriculum in all subjects will be introduced to schools across Alberta in September 2020, he said Friday.” [READ MORE]

School Funding and Religious Freedom: Letter to the Editor

Note: This article is over a year old, but makes some important points on the value of providing freedom and flexibility to access maximum educational choice, including home education, for children and their families.

“Let’s remove our blinders about alternative approaches to designing and delivering education such as homeschooling, and instead be thankful for the parents, teachers, and community members that step up to the plate and offer their creativity, expertise, and resources to educate kids to reach their best potential.” [READ MORE]