December in review: Beware those who put self-interest ahead of students

Posted by Parents for Choice in Education on January 03, 2020

Thanks for your survey participation!

Thank you to everyone who responded to the Choice in Education survey before the deadline in mid-December!

According to the government website, the survey feedback “will be used to inform the development of the Choice in Education Act which will affirm that parents are the primary decision-makers in their child’s education and support the range of choice within the current education system.”

The new Choice in Education Act is anticipated for the spring 2020 legislative session. We will keep you up-to-date as more information becomes available.

Beware those who put self-interest ahead of students

With the anticipated Choice in Education Act on the horizon, it is likely that those critical of supporting education choice will become more vocal in their opposition.

Regardless of any pressure and opposition to do otherwise, PCE urges the government of Alberta to ensure the Choice in Education Act genuinely strengthens the capacity of parents and students to choose education options that most effectively meet each student's unique needs.

Unfortunately, we often hear from parents who would love to access a different education option for their child beyond their default neighborhood school, but feel “stuck” for a variety of reasons, including, but not limited to:

While PCE advocates toward reducing these and other limitations, there are other groups working hard to keep constraints and limitations firmly in place.

Here are a few examples:

We urge legislators and the public to be wary of campaigns which advance a particular group's vested self-interest under the guise of supporting students, and to be cautious of anyone who claims some students are less worthy of support than others (i.e. the oft-repeated claim that private schools only serve wealthy, elite students, even though evidence demonstrates otherwise).

Even if public school divisions offer a variety of choices within their own system, it does not negate the benefit of alternative education options existing outside their system. Which education options exist and flourish should be based on which ones are most effectively meeting student needs, not on one school authority's vested self-interest to monopolize the provision of all the available options.

We encourage all education decision-makers to focus on improving the quality of the settings for which they are responsible, ensuring students are offered the best possible fit for their needs and the greatest opportunity for success, rather than investing effort and resources toward obstructing the existence of other education options.

Parents for Choice in Education interview on Global News Radio

Thanks to Global News Radio's Danielle Smith for interviewing Donna Trimble, Executive Director of Parents for Choice in Education, on December 11th regarding education funding challenges.  Listen by clicking here or on the picture below: 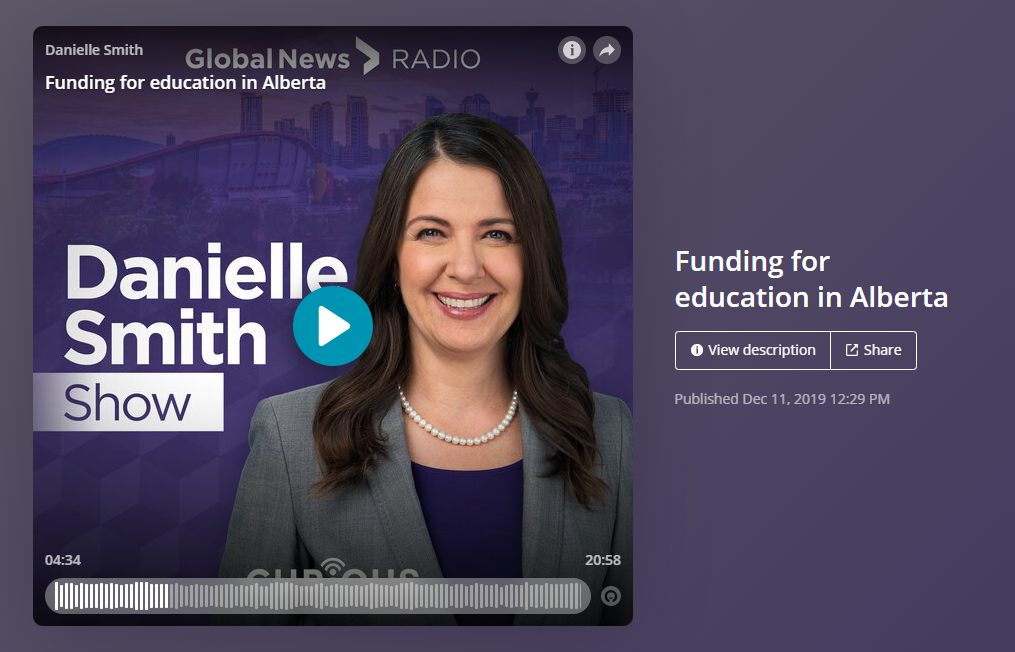 Thank you to each person who donated as part of #GivingTuesday in early December and a special thank you to the generous PCE supporter who provided a matching gift to those donations!

We appreciate each and every person who has graciously donated to PCE over the years, allowing our organization to exist and operate!

Included below are some recently published media interviews and articles, related to our advocacy toward an excellent, quality-oriented, choice-driven education system which recognizes parental authority.

Canadian high school students are among the top performers in reading, according to a new international ranking that presents a stark contrast to the challenges faced in math.

Still, the assessment, released Tuesday morning, revealed some concerns: One in seven Canadian students tested scored at the lowest levels in reading, and the gap in achievement between girls and boys persists. [READ MORE]

Smith: To save tax dollars, CBE should fill or dump under-enrolled schools

So why are those who support public schools so obsessed with the handful of students who go elsewhere? There has been an ongoing campaign to shut down Catholic schools and defund private schools.

Having kids go to private and home-schooling doesn’t take away funding from public; it frees up public money for public education.  [READ MORE]

David Staples: Oil and gas and cattle industries under fire at Canadian schools

The Canadian oil and gas and cattle industries are under fire at schools across Canada. Climate activist Steve Lee is taking aim at fossil fuel and meat consumption as part of his crusade to turn students into fellow activists.

Lee’s crusade, known as the 3% Project, is funded in part by green groups like Environmental Defence and Equiterre, which are part of the ongoing campaign to landlock Alberta oil backed by major U.S. foundations. [READ MORE]