Will Alberta Education Denounce Collusion to Silence Its Critics?

Posted by Parents for Choice in Education on August 24, 2017

On August 23, 2017 Janet French, a reporter for the Edmonton Journal, made a discovery that website domains very similar to Parents for Choice in Education and Informed Albertans had been purchased in order to redirect to Alberta Education’s own website. 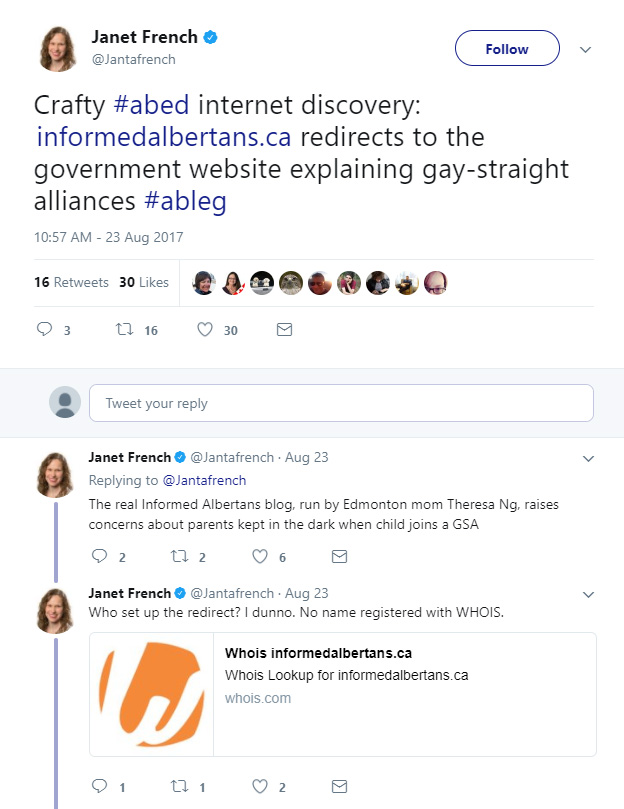 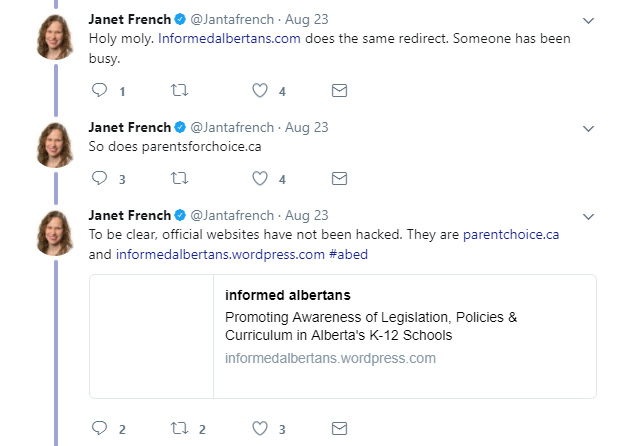 This means that if you happen to type the incorrect web address – for example, parentsforchoice.ca or informedalbertans.com or .ca instead of the correct addresses of parentchoice.ca and informedalbertans.wordpress.com – you will find yourself directed to none other than Alberta Education’s own site, specifically their “What is a GSA” webpage. 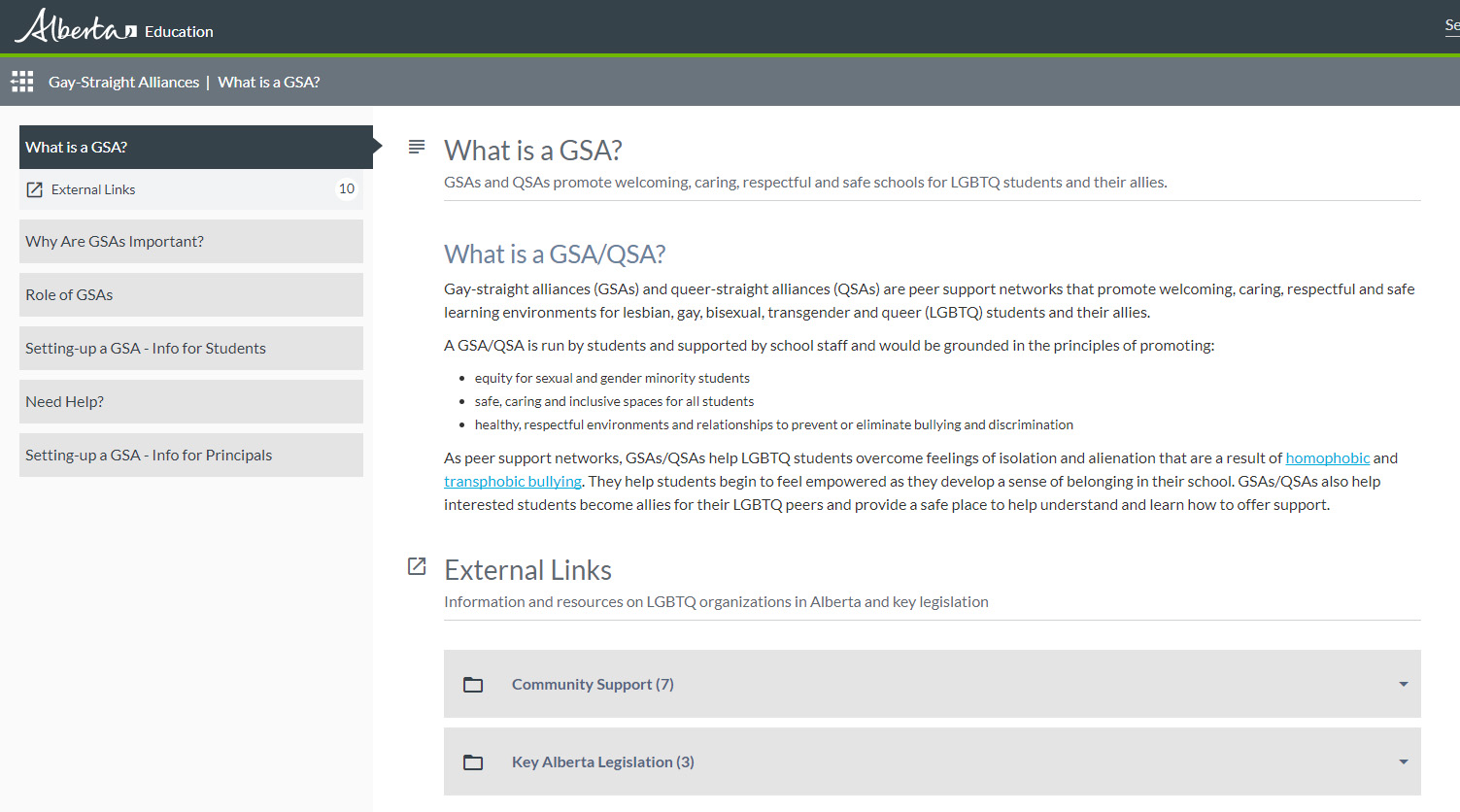 While the online record does not display who bought these domains, it does display when they were all purchased.

Not surprisingly, the Alberta Education “What is a GSA” page includes a direct link to the GSA Network site. 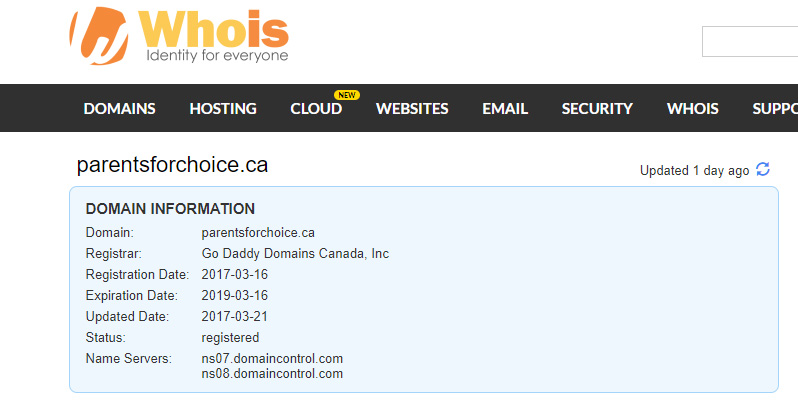 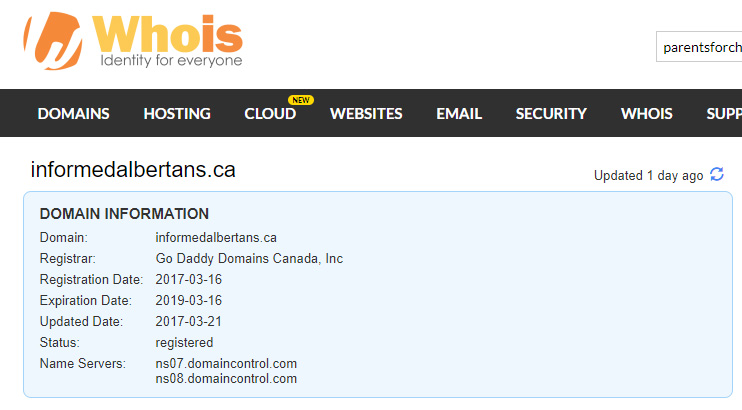 Collusion is an agreement between two or more parties, sometimes illegal and therefore secretive, to limit open competition by deceiving or misleading.

If a person, group or several parties conspire to silence another group by buying up online domains in order to confuse online searches and redirect traffic, this is collusion.

This is an attempt, by shadowy supporters of Alberta Education, to diminish the competition of ideas.

When this is done in a way that benefits the government and silences government critics, it crosses a line that should never be ignored in a democratic society.

Yet the Alberta Government has yet to condemn these tactics.

While no one knows the specific identity of the person who purchased the domains and set-up the redirect, there is no doubt that whoever it was supports the Alberta Government and intends to divert online audiences and suppress specific information and debate.

We have our voice.

But now, in the province of Alberta, there are those who are deliberately attempting to silence us and the thousands of supporters who depend upon us to represent them.

We ask the Alberta Government: do you know who is colluding to silence your electorate?

Will you condemn those who are using subversive tactics to silence the voices of concerned citizens?

To the citizens of Alberta: we urge you to stand with us. Pay attention and realize that the material we provide – that so few are willing to meaningfully investigate and discuss – is important and should not be stifled.

Remember: When information and debate are being deliberately silenced, it is more important than ever to listen.

This article has been co-written by Donna Trimble, Executive Director of Parents for Choice in Education and Theresa Ng of Informed Albertans and will appear on both sites.