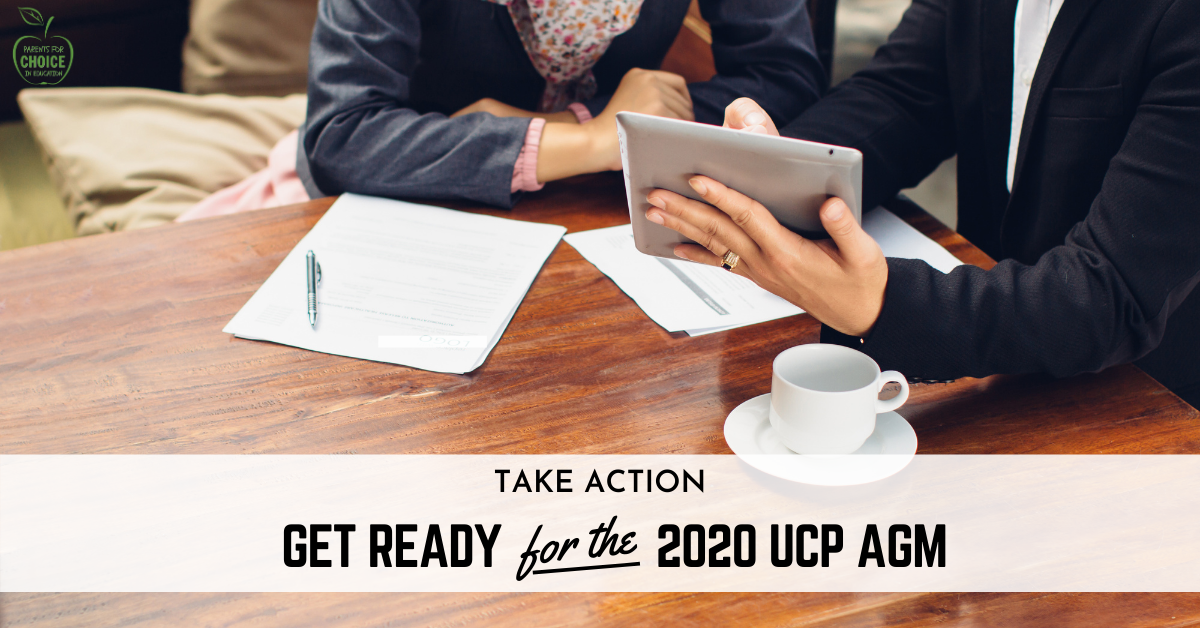 Thank you for attending the United Conservative Party (UCP) AGM to help contribute to the direction of our province, especially in the area of parental choice in education!

PCE has provided below a variety of information related to the UCP AGM, including candidates vying for Board positions, as well as policies, special resolutions, and governance resolutions at issue in this AGM.

We know you have your own well-informed opinions on many of the candidates and issues, so we seek to help fill any gaps and help direct your attention to anything that may be important to your decision-making.

If you have any questions, concerns or feedback related to this information, please email Jeff Park, PCE's Executive Director, at [email protected]

Those attending the UCP AGM have the opportunity to cast a vote for:

A number of positions were also acclaimed, which can be found on the UCP AGM website.

According to the current AGM schedule, voting will take place starting Friday, October 16th at 4:30 pm and will close on Saturday, October 17th at 8 pm.

Thank you to candidates who attended PCE's Virtual Meet and Greet!

PCE extended an invitation to all candidates in contested races to attend two Virtual Meet and Greet evenings with our supporters.

We are very grateful to the following candidates who participated, introduced themselves and answered questions:

To help discern the stance of candidates, PCE also extended the opportunity to all candidates in contested races to provide written responses to two specific questions:

All candidates are listed below (alphabetical by last name) and we will link to their responses as soon possible after they have been provided to us.

PCE also asked each candidate to provide an email address through which our supporters could contact them with further questions; when an email address was provided we have included it below.

An * indicates that the candidate participated in PCE's Virtual Meet and Greet opportunity.

Candidates for position of VP - Membership

Candidates for position of Treasurer

Candidates for position of Calgary Director

PCE has prepared the following guidance for your consideration related specifically to policies that are directly applicable to education or to the capacity of parents to have a direct say in the direction of the party as grassroots members.  The full list of resolutions is available in the UCP policy and governance booklet.

Compulsory unionisation (especially with one, monopolistic union) removes the freedom of choice from teachers to pursue their most favourable contract. This has sometimes even led to approaches to collective bargaining that are adversarial with parents and hostile to choice in education. Too often, the centralised formation of values and ideals fostered by the monopolistic union is inherently opposed to the freedom of Catholic principals, administrators, and teachers to be authentic to their own traditions, values, and ideals. The freedom of association for these education professionals is directly connected to the freedom of their schools to provide robust, authentic choice in education to Alberta families.

A second curriculum rewrite in as many provincial elections is already underway. As the policy rationale itself states, many of the aims of this policy are already being addressed promisingly. Choice in education is strengthened when visions for student learning and curricula are decentralised and not too prescriptive. We do not want to set a precedent for these core elements of education to be a perennial political plaything - dogmatic and compulsory, but no more reliable than the winds of elite opinion.

The education system should be accountable to parents. Too often, it is chiefly “accountable” to elected politicians. The ability to unelect MLAs, particularly if they lied to parents to be elected, is at least a step toward real accountability. Though not included in this particular proposal, we obviously would hope that recall should also apply to school trustees.

An excellent rationale is given: the Alberta Teachers’ Association (ATA) is required to both maintain professional standards (as a professional association) and defend its members against charges of violating those standards (as a collective bargaining unit). These functions cannot be performed by the same body without conflict of interest. Furthermore, as the ATA also performs the functions of a political action committee, teachers do not feel they can oppose the political positions of the ATA (including opposition to choice in education) without being accused of unprofessional conduct. Perhaps collective bargaining and political action are inextricable when the employer is the government, but professional accountability need not be.

Education policy should be responsive to the families whose future depends on it. Institutionally, politicians are unlikely to give up the significant power they have over the education system. Citizen initiated referenda could be a sort of emergency release valve for families to retake control when the politicians will not represent them.

This policy pairs well with Policy 23 and ideally both will pass. However, if Policy 23 does not pass, then the specific wording of Policy 28 could allow the Alberta Teachers’ Association an opportunity to usurp the professional regulatory association function that is referenced, thereby worsening the issues raised in relation to Policy 23. Unfortunately, due to this year’s voting format, we cannot know the status of Policy 23 before voting on Policy 28. Nevertheless, this policy holds such promise that it deserves support. Once again, the rationale provided is excellent: it will strengthen professional accountability for teachers and enable taxpayer dollars to be spent in the classroom instead of the bureaucracy.

Passage of this special resolution is necessary for GR-05 to be ratified.

Leadership elections are an excellent opportunity for ordinary families to get involved in a political party and are often the original reason ordinary people purchase a party membership. In this way, they expand the membership of a political party to be more representative of its grassroots movements and less heavily weighted towards its elites. It was because of a leadership election that choice in education first came to the forefront of the United Conservative Party’s policy agenda. In one of the legacy parties of the UCP, where leadership reviews were frequent, leadership reviews that did not result in triggering a leadership race were still seen as a useful barometer of how in touch the leader was with the concerns of ordinary members. For all these reasons, GR-01 is preferable to GR-02 because it secures more frequent leadership reviews.

Long before election day, each political party engages in an internal process, called nominations, within Alberta's 87 electoral districts. Often this process involves individuals putting their names forward, vying to become the one whose name will appear on the ballot as an MLA candidate for their political party in their constituency. This gives ordinary families the ability to have a say in which MLA candidate will appear on the ballot in their constituency, but can be undermined unless the nomination rules are well known ahead of time and subject to minimal manipulation by party elites. These rules have been vetted by trusted grassroots voices, but even if they had not, any set of comprehensive nomination rules are preferable to unchecked ability by party employees to massage the nomination process to their liking. If there are deficiencies in these rules, they should still be passed, as they establish the authority of party members to set the rules, which can later be asserted to mend any deficiencies.

This special resolution would void GR-05, which we support. The Board hires the Executive Director (who hires the rest of party staff) and meets with him or her regularly. Institutionally, this positions the Board to be a poor check on staff overreach. Ultimately, the members are the best judge of whether the members are being given adequate voice in the nomination process.

Once the governance of the party is more firmly established as belonging to the members, then this will be a valuable proposal to support. However, at present, much of the governance of the party is as yet undefined, leaving it - implicitly - to the Board or the party staff. As such, it is important that this resolution fail for now, but this should not be construed as permanent opposition to its principles. Also, because of this year’s voting format, we will not know if any of this year’s good governance resolutions have passed before voting on SR-06.

Parents for Choice in Education is a non-partisan organisation for one very simple reason (among others): no party is always right and no party is incorruptible. The reality is that the Board already has the authority to revoke memberships. If they had wanted to use the powers they already possess responsibly - to revoke the memberships of people working against member-passed party policy and statements of principle - then they could have done this at any time. However, as stated in the rationale for this special resolution, this was not done. To give the Board a further rationale to revoke memberships, when (based on the Board’s activity thus far) this authority has not yet been applied responsibly and consistently, would be folly. The principle that the members make the party may bring temporary embarrassment, but its reverse deserves everlasting disgrace.

The phrase “for any reason it sees fit” must be struck from the current Constituency Association Rules, which this resolution does, but GR-13 provides due process more securely. Unfortunately, with this year’s voting format, we cannot know the status of GR-13 before voting on GR-14.

Constituency Associations are important, but like any group of humans, unless held accountable they can fall into self-serving patterns easily.

As a non-profit organization PCE depends entirely on the donations of citizens to continue strengthening education choice in Alberta.

Consider donating today to ensure we can keep doing this important work and thank you to each person who helps support PCE as we advocate for excellence in education through maximum parental choice!