Since when are parents a “special interest group”?

Posted by Parents for Choice in Education on October 11, 2017 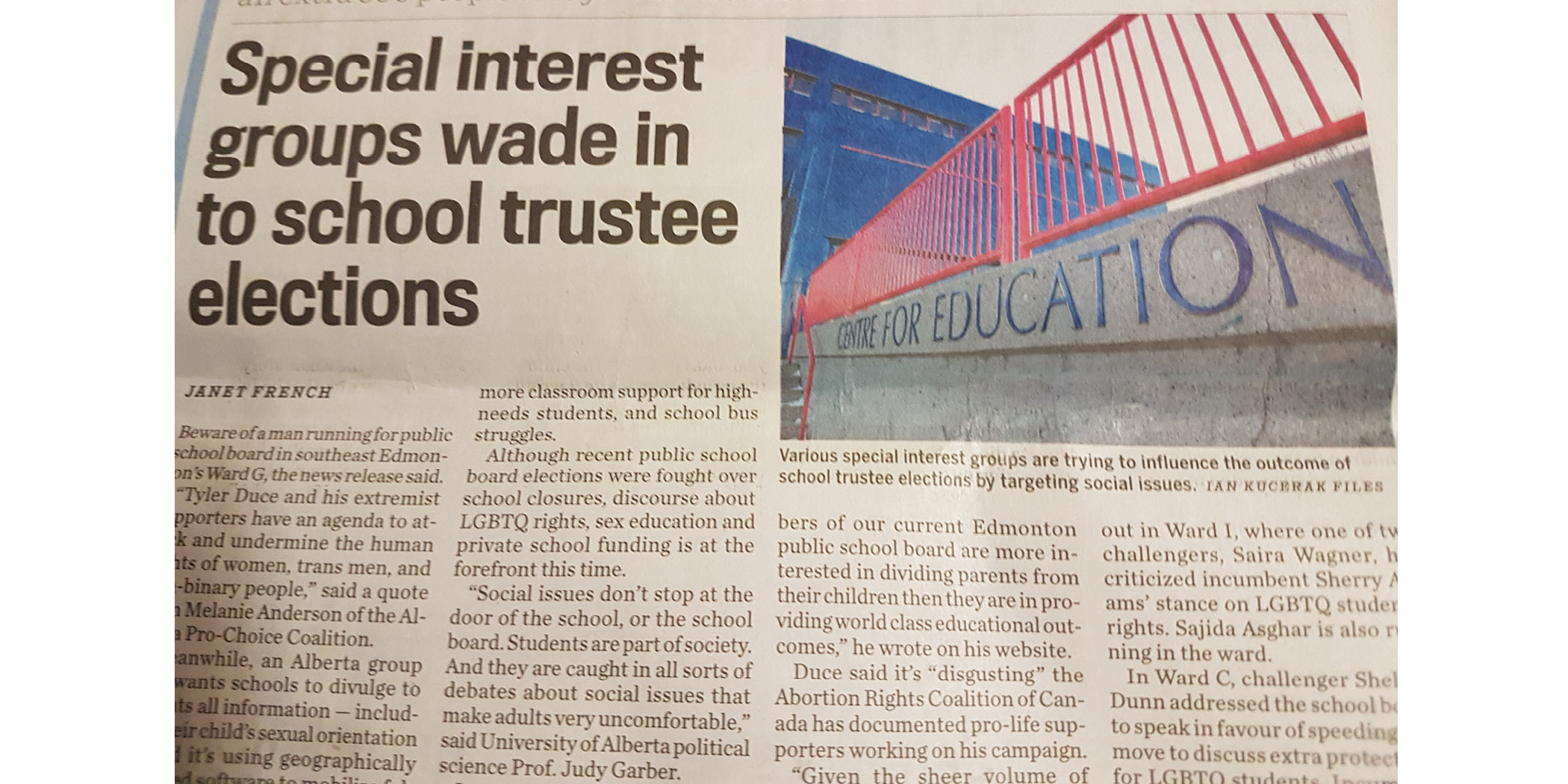 In this article, Parents for Choice in Education (PCE) was specifically mentioned as being one of the groups attempting to influence the outcome of trustee elections in Alberta, namely through the creation and distribution of our Trustee Voter’s Guide.

Why is it that parents have had to band together by the thousands under the umbrella of an advocacy organization like PCE in order to finally gain a voice in the public sphere regarding the education of their own children?

The reason is because growing numbers of parents recognize that their voice as the primary stakeholder in education is being ignored.

Instead, decision making has increasingly been centralized in the hands of Alberta Education, the Alberta Teachers’ Association and other organizations that seek to enforce curricula and activities in schools. This creates a situation where a few education elites are gaining massive control over the direction of education in Alberta, while parents are sidelined.

The result? There has been a dramatic drop in skills outcomes in areas such as Mathematics due to the ill-conceived methodology of Discovery math. Report cards offer little to no clear assessment of where students rank in their subjects. And the focus on essential education skills outcomes is taking a backseat, resulting in the removal of key components in education such as script, history, geography, grammar and more.

Parents are paying close attention to the upcoming trustee elections because they are genuinely concerned for the future of their own children’s education.

Will their children be able to compete on the world stage? In some areas, like mathematics, we see that many already cannot.

How do the elites, such as the ATA, respond?  They, alongside several public-school board trustees, have advocated for morphing all public-school options, including Catholic education, into a one-size-fits all system. They are also seeking to diminish testing so outcomes cannot be measured, and are advocating for the stripping of taxpayer funding from alternative school options.

Alberta parents understand that if they do not vote wisely and rein in this agenda, their ability to be responsive to the unique needs of each of their children will be removed and the very quality of education will continue to deteriorate in Alberta.

There is another critical concern parents are rising up to confront. School board policies and legislation are increasingly leaving loving parents out of important conversations that schools are having with vulnerable sexual and gender minority children.

Education Minister David Eggen has stated unequivocally that he will table School Act amendments that will forbid parent notification for children as young as five, including those at risk of self-harm.

A child’s outcomes both intellectually and emotionally are vastly improved when parents are involved. Parents are genuinely concerned they may be left out of the care of their precious children. It is essential every child who is struggling in school have access to an expansive network of care and that schools and parents are free to work together to support students and keep them safe.

Parents have been ignored for too long. They have become increasingly aware that their removal as a central authority and decision maker with regards to education, is putting their own children at risk intellectually and emotionally in Alberta schools.

They have come together in the thousands to amplify their voice and Parents for Choice in Education is the result. The PCE Voter’s Guide is a resource that will help parents to elect trustees who will represent them, rather than attempt to replace them.

No group has as much invested in the education of children than their own parents.

For the sake of Alberta children, and the success of our next generation, parents must not be relegated to the sidelines as a “special interest group”, but instead, must be respected once more as the primary educator and caregiver in their children’s lives.

Remember to make your voice heard and vote wisely on October 16th.