Posted by Parents for Choice in Education on March 11, 2021 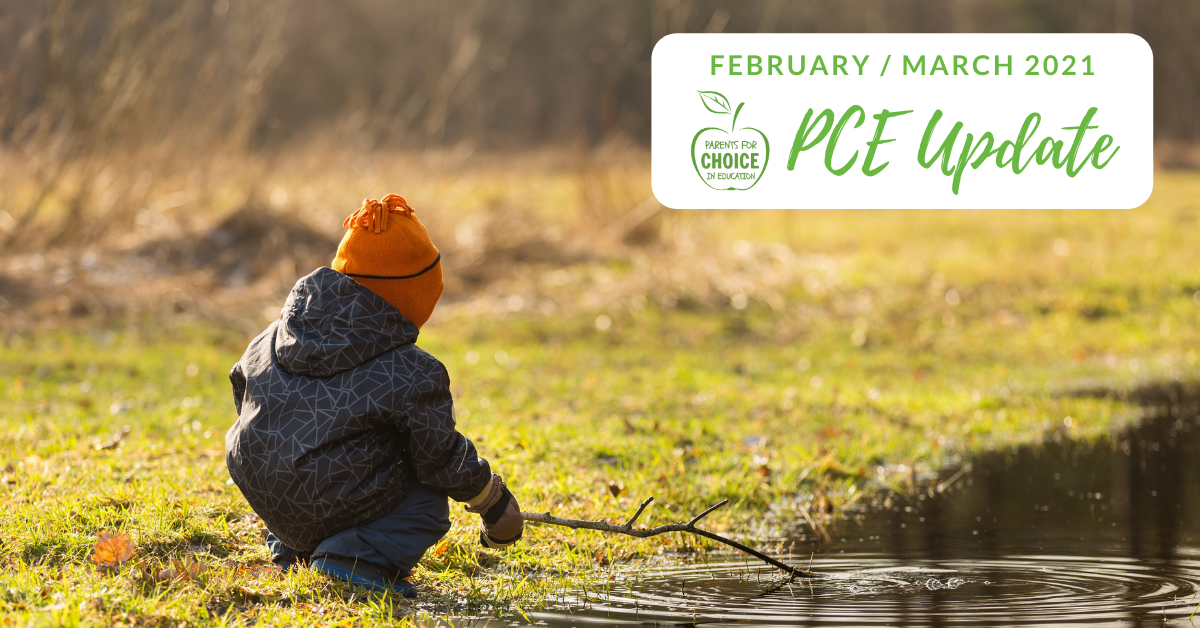 We hope this message finds you well!  Here’s a round-up of important highlights and current opportunities related to parental choice in education.

The Board of Directors of Parents for Choice in Education (PCE) is pleased to welcome John Hilton-O’Brien to the role of PCE Executive Director, effective March 9th, 2021.  John has prepared an introduction to PCE supporters, which includes more details about his background and what brings him to this important role.

A Letter of Introduction from PCE Executive Director, John Hilton-O'Brien

Human nature being what it is, we are always tempted to tell others how to live.  It doesn’t make us bad people – but it does tend to blind powerful people to the notion that there must be a limit to power. This is especially true when it comes to those entrusted with the coercive power of the state.

This, of course, is where Parents for Choice in Education comes in.  It is also where my role lies, as its new Executive Director.  My role is not to tell people how to educate their children: it is to ensure that the rights of parents are strengthened and fortified, rather than trampled by those in positions of power.

My motivation is personal. Like many people, I was bullied mercilessly in a Calgary public school - until I found a way to transfer to another school’s special academic program. I later made friends with others whose lives were also improved by education choice – whether by transferring between Catholic and public systems, or enrolling in alternative schools, home education, and charter schools.  In every case, access to education choice was like air to a drowning child.

Some friends and I grew concerned about attacks against educational choice in Alberta in the early 2010s.  I saw a threat to that very personal experience of the benefits of school choice. As a result, I helped launch PCE nearly a decade ago, and served on its board from the beginning.

I bring some relevant experience and education.  I was one of the fifty founders of the original Wildrose Party (and its second President) and have run some political campaigns.  I have a degree in Social Work with a focus on community organizing, and a graduate degree in Philosophy (think Ethics) with some time teaching university.  I have run businesses. I’ve helped people with little power to improve their situations – from the poor and the homeless to those with developmental disabilities. I know at least enough to be aware of how little I really do know.

A final point that bears mention: after eighteen years of marriage, I don’t have kids.  It is a situation I generally pass over in silence – it’s painful for my wife and myself.  But it is part of an obvious question: “How can you head up an organization called Parents for Choice in Education, when you don’t have children yourself?”

The answer is in the African proverb that “it takes a village to raise a child.”  Civilizations ancient and modern have asserted an interest in education to form citizens for their purposes. But to what extent does the state’s interest in the education of children allow it to override the interests of the parents of that child?  My private dilemma – how I can discuss the choices of parents – mirrors the public one. It is by no means clear that the village has any right to raise your child.

When we talk about the educational role of the Province of Alberta, are we talking about Jason Kenney having the right to educate your child?  Or Education Minister Adriana LaGrange?  A faceless bureaucrat who approved a curriculum document? While there may be some grand language about the importance of public education, it seems unlikely any of us would be willing to hand over the education of anybody’s child to these people individually.  Failing that, the state’s interest in education is that of a faceless legal entity over an idea – and nothing more.

Some attacks on parental choice have recently been blunted - thanks largely to leadership from previous PCE Executive Directors and the hard work of PCE’s thousands of incredible supporters.

However, an aggressive and very well-funded lobby that attacks parental rights and school choice of all kinds is still entrenched in positions of enormous power.

PCE webinar: Get involved in school board trustee elections!

School board trustee elections are quickly approaching in fall 2021 and are an important opportunity to make a difference in Alberta’s education landscape.

PCE will be hosting an introductory webinar for those who may be interested in getting more involved in any capacity, whether exploring the option of helping support someone else as a candidate or even considering running as a candidate themselves.

*PCE thanks those who have already completed the online form - there is no need to complete it again as you will already be on the list to receive webinar access.

The Protect Child Health Coalition (PCHC), an international organization facilitated by Family Watch International, is sounding the alarm regarding sexually graphic material being made available to students through school research databases.  The PCHC recently hosted a webinar, now available on their website, to equip parents, teachers and administrators with more information.

Given that some of these databases may be offered in Canada as well, we suggest teachers and administrators investigate database portals offered in their schools.  We also encourage parents and grandparents to have conversations with their school-age children about any research databases they may be using through their schools (including home educators whose children may use library databases) and alert the school and PCE if sexually graphic material is accessible, as described in the webinar.

Applications for the 2021/22 Minister’s Youth Council are being accepted until March 24, 2021.  According to the Alberta government’s Student Engagement webpage:

“The Minister’s Youth Council consists of about 40 junior and senior high students with diverse interests, identities, backgrounds and perspectives from all regions of Alberta. Students on the council provide their perspectives on a number of education topics.”

For those interested, more details are available on the Alberta government’s Student Engagement page.

Included below are a selection of recently published articles, related to our advocacy toward an excellent, quality-oriented, choice-driven education system which recognizes parental authority.

Will the Home-Schooling Trend Continue Post-Pandemic?

"As scores of parents were thrust into home-schooling for the first time due to the pandemic, the experience sparked a home-schooling sea change that could have staying power, says Patty Marler, a spokesperson for the Home School Legal Defence Association of Canada. Marler recently spoke with over 100 families to gauge their pandemic home-schooling experience, and said many—surprised by their success—are planning to stick with it."  [READ MORE]

PCE is excited to see an expansion of choices on Alberta’s education landscape, with this newest charter school and one other approved and scheduled to open in fall 2021 – a substantial expansion after over a decade with zero new charters.  Thanks to Lisa Davis and Sarah Bieber for helping create this new education opportunity for Grade 7-12 students. [READ MORE]

*To learn more about charter schools and the changes to legislation which have led to more charters recently in Alberta, PCE recommends reading a 2019 column by Michael Zwaagstra entitled “Expanding Charter Schools in Canada Is a Good Idea”.

The “Theodore Court Case” has been winding its way through Saskatchewan’s court system since 2005, focused on the question of government funding for non-Catholic students who choose to enroll in a Catholic school. The final resolution of this case has significant implications for our province, as Alberta similarly provides public and separate school system choices.

"'We are relieved and reassured by this decision, and we believe it can be considered a victory for both religious and parental rights and freedoms,' Tom Fortosky, the executive director of the Saskatchewan Catholic School Boards Association, said in a statement." [READ MORE]

This column provides on overview about the role of trustees and the upcoming election, written by the superintendent of the Livingstone Range School Division, Darryl Seguin. [READ MORE]

As a non-profit organization PCE depends entirely on the donations of citizens to continue strengthening education choice in Alberta.

Consider donating today to ensure we can keep doing this important work!