Posted by Parents for Choice in Education on February 01, 2019 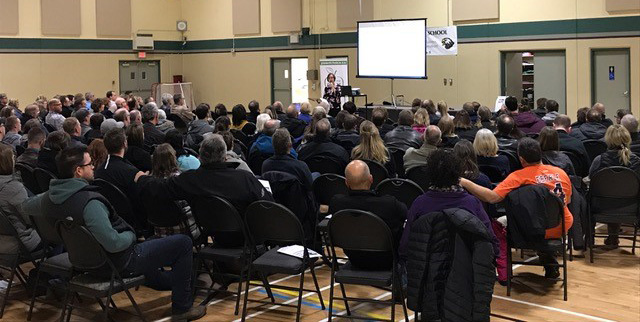 January was an exciting month for Parents for Choice in Education (PCE) as Donna Trimble, PCE’s Executive Director, and Theresa Ng, PCE’s Communications Advisor, were invited to present in several locations across the province.

In fact, in just a 10 day span at the end of January, PCE did presentations in Grande Prairie, Killam, Ponoka, St. Paul and twice in Calgary!

A huge thank you to:

• The one-time and monthly donors who make all of PCE’s work possible, including ensuring our capacity to create and distribute resources and provide presentations to those who invite us to speak to their community

For anyone interested in inviting PCE to present to your group of at least 40+ people, please contact [email protected] to ask for more details.

To financially support PCE as we continue to spread awareness of changes which threaten choice in education, please visit our donate page.

Thank you to those who responded to the survey in our last newsletter indicating your willingness to support PCE’s advocacy efforts in preparation for the 2019 election.  We will be reaching out to each of you next week with more details!

We continue to look for several committed citizens within each of the 87 constituencies who will help PCE collect and disseminate important election information to our supporters within each area.

For those interested in helping out, please click here or on the button below and we will be in touch with you shortly.

Exciting news was received from the Association for Reformed Political Action (ARPA) in early January:

“ARPA Canada has been granted intervenor status in the ongoing court challenge to Bill 24, a bill which mandates unacceptable changes to school policies.

In addition, we will be allowed to present a case study, through affidavit evidence and oral arguments. This is a huge development, as allowing an intervenor to present evidence is a very rare occurrence. We are thankful that, in addition to the parental rights argument brought forward by the Justice Centre for Constitutional Freedoms, we now have the opportunity to present a distinctly Reformed argument.”

Click here or on the image below to watch ARPA’s video discussing this new development!

To access additional background information on this constitutional court challenge, visit the “Active Cases” section of the Justice Centre for Constitutional Freedoms website. 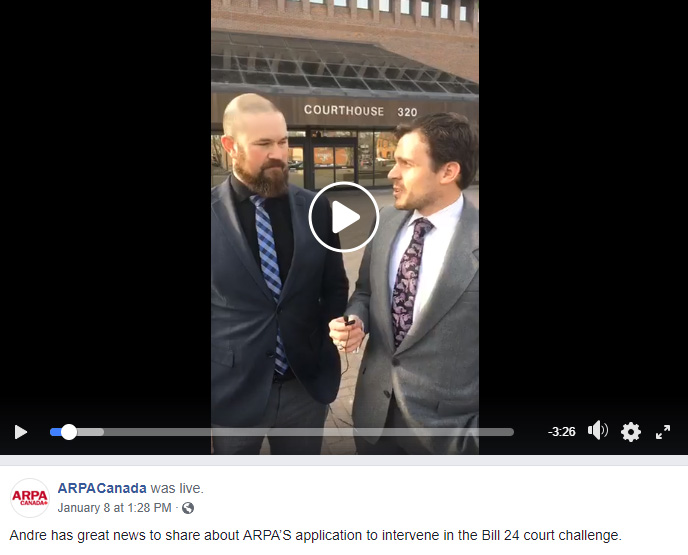 “None of us have an issue with ensuring that students are in a safe and caring, loving environment where they cannot and will not be bullied and where they are supported by their peers,” Trimble told the crowd, “but many of us have an issue when we see that the very legislation that was sold as that, is now being used to enforce one particular perspective of gender.”  [READ MORE]

“What really stands out for me in this report is that we show an average percentage of students meeting expectations at probably low 90s, but when we look at the results of PATs, it’s about 59 per cent. That’s quite a difference. How do we reconcile that?”  [READ MORE]

For students, choice of schools is better than no choice

"The fact is, education in Alberta works so well because of the choices available, not in spite of them... Choice in our school systems provides an opportunity for collaboration — a great model for our students to see." [READ MORE]

"We believe that educational choice, parental involvement in their schools, and diversity of forms, public, separate, francophone, charter, independent and home schooling, enables parents to provide their children with an education consistent with values, beliefs and choice they wish to instil in their children." [READ MORE]

Many teachers love the choice that union leaders loathe

Note: While this article focuses on expanding education choice in the US, it raises important points to consider in Alberta.

"As legislative debate builds in states such as Arizona and Tennessee over the possible expansion of education savings accounts (ESAs), which would empower more families with educational choice, it would be wrong to assume from media reporting that teacher unions speak for everyday public school teachers in expressing hostility to all such efforts to extend the benefits of choice more widely."  [READ MORE]

FROM THE PCE ARCHIVES

Three years ago this January, the Calgary Herald published a PCE column "An Alberta mother's call to action: When parents lose rights, children are endangered" with a message more important than ever before now that secrecy has since been mandated by law.

"Who will be to blame if children are lost? The parents, because they put their faith in the authorities and were unaware they were being kept ignorant of their child’s needs? The teacher and school that hid the child’s struggles from the child’s parents? Or the Alberta government, which voted anti-family Bill 10 into law and followed up with such a dangerous guideline?" [READ MORE]