Does the Teachers’ Union Control Your School Board?

Posted by Parents for Choice in Education on October 24, 2022 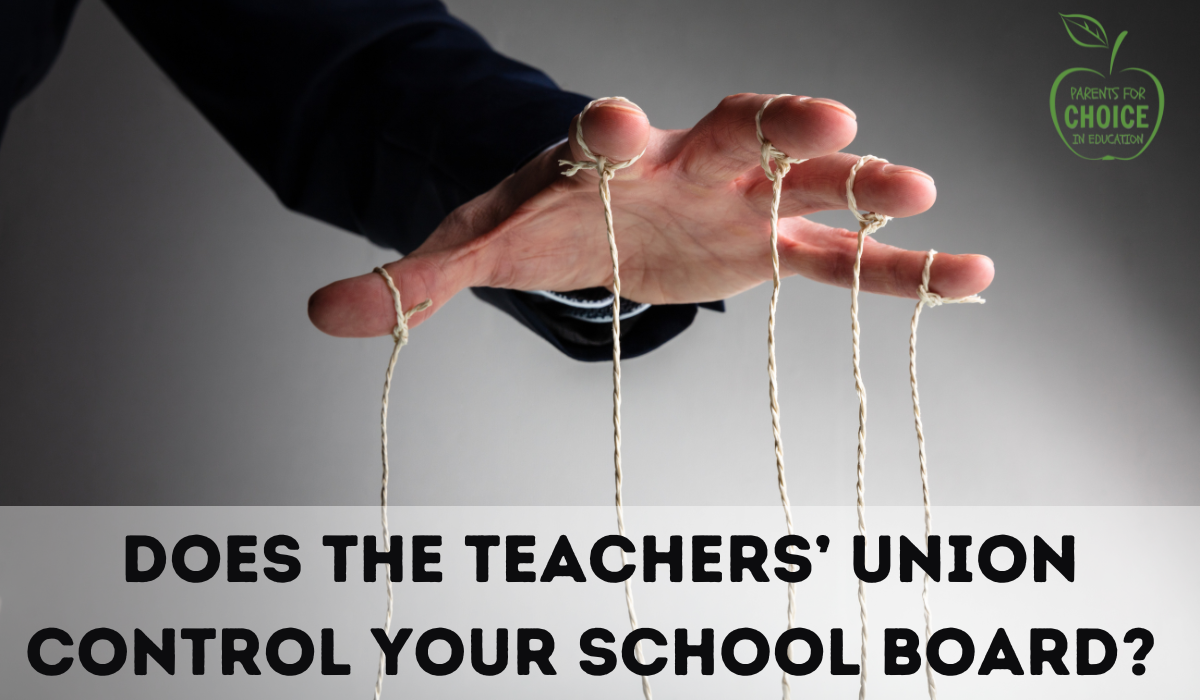 Written by John Hilton-O'Brien, Executive Director of Parents for Choice in Education,

as published in the Western Standard October 21, 2022

The recent school board elections in British Columbia revealed an impressive twist. Despite minimal time to organize and fundraise, a new parents’ group in BC managed to elect three trustees, including one in Chilliwack. It's an especially incredible feat in the face of the Chilliwack Teachers’ Association organizing their own slate of candidates.

Make no mistake: The unions are a political machine and they're gunning for control. Parents who don’t want the teachers’ unions to control their children’s education outright, can’t afford to sit on the sidelines — they need to get in the game.

Thankfully parents in BC took the initiative to do just that. ParentsVoice BC (PVBC) is the newest civic political party permitted under BC law.

Properly called “elector organizations,” BC intends civic parties to be organizations that endorse candidates and are allowed to fundraise and incur election expenses.

Despite this being its first election, PVBC managed to elect three trustees. The interesting part was this: The Chilliwack Teachers’ Association (CTA) responded by publicly endorsing their own slate of candidates — for the second election in a row. In other words, the teachers’ union was acting like a political party, except without any of the restrictions or reporting requirements.

The integration of the union efforts is breathtaking. Most of the same trustees were also endorsed by the Fraser Valley Labour Council.

Meanwhile, the BC General Employees’ Union endorsed slates across the province, including in Chilliwack. A fundraiser for the union slate was done by a group with anonymous leadership called “Chilliwack Advocates for Inclusive Leadership” — but local media published a picture of the fundraiser as part of their coverage of the CTA slate endorsement.

Meanwhile, the Vancouver and District Labour Council (which also endorsed successful slates) appears to have established a website called “Unmask the Right,” which breathlessly singled out PVBC candidates as being an “AntiVaxx/Conservative Alliance,” which was “Organizing to Take Over School Boards.”

The union activists claimed there was a “slate” of right-wing candidates in Chilliwack, but no organization aside from the CTA nominated more than a handful of candidates. While the various union activities could have been in direct contravention of BC law, there is no talk of sanctions.

Lest you think this is a one-off, it’s worth noting Ontario unions are engaged in similar activities for the Ontario school board elections on October 24.

The Ontario Federation of Labour (OFL) has a comprehensive website with a full slate of candidates at every level of local government in 15 major jurisdictions. They connect to the publicly-funded Canadian Anti-Hate Network, which wrote attack pieces about BC candidates, and is now pivoting to Ontario candidates.

The OFL admits a debt to the Ontario Secondary School Teachers’ Federation (OSSTF),which seems to have endorsed full slates in most jurisdictions, including Toronto. The OSSTF’s election planning document could be taken as a model for a successful provincial political party. It also provides a “Municipal and Trustee Election Manual” for endorsed candidates.

Astoundingly, OSSTF literally has an election platform. While the BC unions did not leave their manuals out in plain sight, the Ontario documents give an insight into how the BC unions may think.

Elections like the one in Chilliwack multiply the impact of union election organizing. In Chilliwack, every elector casts several votes and the top several candidates are all elected together, a process referred to as an “at-large” election. Chilliwack has about 1,800 teachers and support staff. That’s a voting bloc with more than a quarter of the votes needed to elect trustees there. If you increase the size of that bloc through its cooperation with other union memberships, the mathematics of at-large elections mean you have more than enough to elect a slate.

With a voting bloc of such power, it seems almost miraculous two right-wing candidates were elected and hints at an underlying fury among the parents who voted for them.

The net effect in Chilliwack is the Teachers’ Association currently controls the board. It’s a bit like the Praetorian Guard in ancient Rome, which periodically deposed the emperor in favour of one who promised them more benefits.

They control things for now — but the arrangement isn’t stable.

Other provinces can point to similar union organizations with the power to influence everything from curriculum on down. Union election organizing may even be universal. The simple fact is there's no right-wing organization even nearly equivalent to union involvement in local races.

While conservative organizers sometimes talk about the school board and municipal races being dominated by an NDP “farm team,” they generally don’t realize how far off they are. It’s more like having your high school team play against the Harlem Globetrotters.

If parents — especially conservative ones — want a voice on their local school boards, they're going to have to up their game. But as the conservative minority in Chilliwack demonstrates, the union hold on office is tenuous.

There has never been a better time to organize.

John Hilton-O’Brien is the Executive Director of Parents for Choice in Education, www.parentchoice.ca
Please do not hesitate to contact us for more information or to share your concerns!