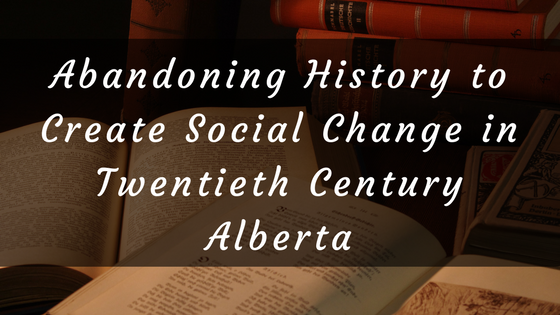 A version of this article was originally published in the Fall 2017 issue of HOME Matters magazine (The Voice of the Alberta Home Education Association) and is shared with permission.

During the first few decades of Alberta’s education system, one of the subjects students were required to take was history.

Canadian history, British history and world history were all part of the program. History was seen to be the central component of citizenship training which encouraged students to view themselves as Canadians within the British Empire. That is, learning history helped students to develop a sense of personal and national identity.

However, educational reforms introduced into Alberta during the 1930s led to history as a subject being replaced by social studies. This was a central component of the movement for “progressive education.” The abandonment of history in favour of social studies in Alberta is explained by Professor Amy von Heyking of the University of Lethbridge in her book Creating Citizens: History and Identity in Alberta's Schools, 1905 to 1980 (University of Calgary Press, 2006).

During the late nineteenth century, a new educational philosophy known as “progressive education” began to develop in some American universities. The central figure in this new movement was John Dewey, a philosopher and educational reformer at Columbia University’s Teachers College in New York City. Dewey’s philosophy was anti-Christian and he was a signatory of the Humanist Manifesto of 1933, now known as Humanist Manifesto I. This manifesto advocated a socialistic approach to economics.

Many other leaders in American educational circles also embraced and promoted the progressive education ideal. Among these was George S. Counts whose book Dare the School Build a New Social Order? advocated using the public education system to promote socialism.

By the 1920s many educational leaders in Alberta were embracing progressive education as well. Prominent among these was the Supervisor of Schools, Hubert Newland, a disciple of George Counts.

In the early 1930s the Department of Education prepared a revision of Alberta’s curriculum based on progressive education. This revision was initiated under the United Farmers of Alberta (UFA) government. However, in 1935 the Social Credit Party of William Aberhart defeated the UFA in the provincial election. William Aberhart became premier and also the minister of education.

From History to Social Studies

Although there are a number of different elements to progressive education, one of the most significant ways it influenced Alberta’s education system was through the implementation of social studies. At the higher grades, the “philosophy of progressive education was best reflected,” von Heyking writes, “by the abandonment of courses in history and civics and the adoption of courses in social studies” (p. 69).

In contrast to previous educational theorists, progressive educators did not think teaching history was beneficial. Progressives thought that students should be liberated from the past rather than taught about the past. In their view, the values of previous generations were not worth perpetuating by teaching them to children in schools.

Progressive education’s deliberate switch from history to social studies was therefore very significant. As von Heyking puts it, “The abandonment of the attempt to know the past represented a tremendous shift in the content of school knowledge. As inadequate as earlier curricula had been, they had always reflected the belief that an understanding of the past was central to defining ourselves. Progressive educationalists sought to emancipate children from the past in order to create a better society. They rejected the notion that a society must root its sense of belonging within its historical experience” (pp. 89-90).

This did not mean that history would be neglected altogether. It still had a place within the social studies curriculum. However, history would be taught selectively, when it could be used to support the goals of creating a better society. Superficially, it appeared that social studies included the teaching of traditional history.

Von Heyking notes, however, that this appearance was somewhat deceiving. As she puts it, “though the courses looked like traditional history courses, progressive educationalists in creating social studies had in fact adopted a new philosophy of history. Gone was the belief that the past was worthy of study for its own sake or even because of what it could tell us about the present. History had to be useful, and it was useful only insofar as it could demonstrate a direction for the future” (p. 71).

That “direction for the future” desired by progressive educators was not ambiguous either. They believed that the goal of creating a better society could be achieved through government planning. In their view, capitalism encouraged selfishness, and therefore significant government intervention was necessary to solve social problems.

The objective of achieving a supposedly more just society thus guided Alberta’s progressive educators in their development of program resources. As von Heyking notes, “Progressive educationalists created new courses and new resources that would prepare students to take up their responsibility for restructuring society along more rigorous standards of social justice. They sought to create social activists, familiar with local issues and committed to social change” (p. 76).

One purpose of traditional history in the schools had been to teach students about their community. As they learned about the struggles and achievements of their nation, they would identify with it. For example, many Canadians take pride in the capture of Vimy Ridge by Canadian forces in 1917. As a national accomplishment, it helps to provide a common bond of national identity. In this sense, history provides students with a sense of who they are as part of a larger community.

Progressive education takes a very different approach. It wants to ditch the past for something new and better. With this approach, “Students were not led to discover who they were through an examination of what they had been; they were set to the task of self-definition by imagining who they would like to become” (p. 90). Rather than embracing the historical identity of their community, they were encouraged to determine a new identity for themselves.

In short, von Heyking writes, “The purpose of schooling in the progressive era of 1935 to 1945 was to effect social change. . . . Progressive educators sought to create a new world; they wanted to use the tools of science to solve social problems and reconstruct society according to more rigorous standards of social justice” (p. 152).

Replacing history with social studies in Alberta’s classrooms was not a positive development. It was intended to undermine the existing social order and lead to a new social order under the guidance of progressive educators. Progressive educators saw the classroom as a tool for creating social change by teaching children that a just society was only possible through increased government intervention.

Using the education system to initiate left-wing social change is bad enough. But the results of progressive education in the social studies curriculum also denied students the opportunity to understand the history of their own community and the identity that this history could provide them with.

As von Heyking explains, “No coherent treatment of the country’s past was ever included in social studies curriculum. The past was fragmented and obscure. This lack of sustained inquiry into the nature of the past meant that students were left with little historical consciousness. They had few opportunities to examine change in any society, let alone Canadian society over time. They were left with a limited understanding of their place in a changing community; they were left with an inadequate sense of themselves” (p. 154).

The biggest losers, then, were the students. As von Heyking’s book demonstrates, children can easily become guinea pigs in some progressive philosopher’s vision of a new society. Current changes in Alberta’s education system only serve to reinforce this concern. Clearly, parents need to keep a close eye on what their children are being taught.

*PCE is non-partisan and non-sectarian. We provide articles and resources from outside sources as they offer valuable information and diverse perspectives on a variety of topics. The publication of papers and columns on the PCE website should not be considered an endorsement by PCE of the content of these resources.