Beneath the surface of Alberta's great curriculum debate

Posted by Parents for Choice in Education on April 03, 2021 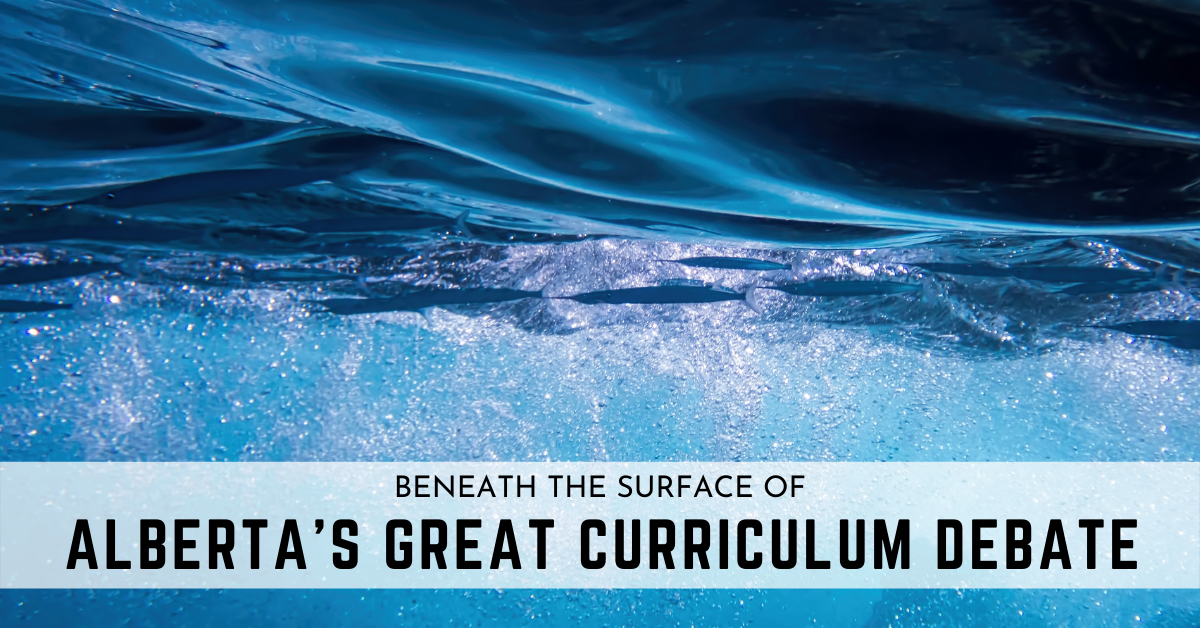 The rhetoric is so thick in discussions of Alberta’s K-6 curriculum, you could be forgiven if you imagined the sky is falling.  The truth is that it is, in a manner of speaking.  There are underlying issues that go deep below the surface, and they shake some of Alberta’s centers of power.

We’ll start by pointing out the Education budget: at 6.5 billion dollars, it is over a tenth of Alberta’s government spending. The most influential stakeholder in education, outside of the Minister’s office, is the Alberta Teachers’ Association (ATA), with a budget of $45 million per year.  The ATA is a very powerful organization, able to lobby the minister and the public.  It is a big stakeholder: when it moves, the earth shakes.

The ATA also sits in some interesting positions.  It is a labour union, which also represents principals – who are management. It represents members - but is also responsible for their discipline and accreditation.  It conducts union negotiations – but seems heavily tied to one political party (the NDP).  It has a vigorous lobbying campaign, partnering with a variety of other organizations that it appears to fund (including Public Interest Alberta and the Parkland Institute) – possibly out of the $3.8 million designated as “other” in their annual report. The position is powerful, complicated, and has conflicts of interest that it must defend. This means that the ATA is necessarily “touchy” about its prerogatives.

So, when I say the ATA was cut out of the development of this curriculum, you must understand there are a lot of very, very powerful people who are upset.  The ATA is the only independent power group of any note: Henry the Eighth would have called it “an overmighty subject,” and a threat to the Crown.  It is understandable that the Minister would want to curb its power.  But its leadership is understandably angry at being left out – to the ATA, the Minister’s action was tyrannical: the ATA assumes that it should have control over curriculum and everything else in education, because it assumes that is its rightful place in the world. You don’t challenge that level of privilege and not expect an explosion.

There are more depths to this.

The first depth is the presence of two competing ideologies in education.  The most prevalent in Faculties of Education is that children should be taught skills, not facts.  Children just need to learn to exercise and defend their freedom.  The fact that that freedom was won through a sequence of events – magna carta, the development of parliament, the BNA Act, and the Constitution – doesn't matter.  Yet, the competing ideology, knowledge development, claims that students won’t be able to learn any skills if they do not have a basis of facts from which to explain and argue them.  The knowledge ideology also asserts that a common understanding of facts and history holds us together as a culture, by giving us something in common- an idea whose very basis is offensive to skills theorists.  Needless to say, the skills theorists tend to be progressive, “woke,” and – in Alberta – are often adherents of the NDP.

The second depth has to do with the position of Education as an academic discipline.  Most people are probably unaware that the Faculties of Education in Alberta were only established in 1945.  Prior to that, teacher education happened at a “normal school,” dedicated to the brief preparation of teachers who already understood the content of their subjects.  Two Education faculties were established by law: one in Edmonton, and one in Calgary.  Due to the way that Alberta manages higher education, these faculties were granted a monopoly: no other colleges could offer the degree without the specific permission of the Government.

The problem, though, was this: what would they teach?  If content were needed, that could be delivered better by the regular academic faculties.  Teacher candidates wanting to teach Social Studies, for instance, would be better served studying in the departments of History, Sociology, Anthropology, or Psychology. English or Language Arts?  The English department.  Even Education itself was a splinter from Philosophy – the discipline of the famous John Dewey (who would not be allowed to teach in Alberta today, unless he went back to school for two years).  All the Education faculty was left with, as its own content, was to teach methods.  In other words, skills.

In that context, it is not surprising that Faculties of Education would instruct teacher candidates that skills are all important.  It is not surprising that they would begin to think it themselves (even though Dewey warned against abandoning content).  While Faculties of Education have added other degrees to their offerings, people have often looked askance: an M.Ed. in “leadership” from a faculty of education may not be as well accepted outside of schools as an MBA, and a degree in Educational Psychology may not be as well accepted as a graduate degree in Psychology or Social Work.

In consequence, faculties of Education and the teachers they produce tend to be adamant skills theorists. This is partly a case of Maslow’s Hammer – “when you’re a hammer, all the world seems a nail.”  However, there are also careers caught up in this: a knowledge theorist in a Faculty of Education will seem like a traitor, a threat to everyone else’s livelihoods.  This tends to lead them to mute themselves – knowledge theorists generally do not last long in Faculties of Education.

Those faculties of education are big business, too.  For example, while Calgary’s Faculty of Education is only the fifth largest for undergraduates (1,050 out of 24,203), it is the second largest number of graduate students (1162 out of 6,455).  About 7.2% of U of C’s budget of 1.5 billion depends on that faculty, in other words – or 108 million dollars.  Any move by the government that discounts the importance of Education as a faculty – and insisting on the primacy of knowledge over skills does just that – is going to raise a lot of advocacy.  That doesn’t just mean paid advocacy: it means a host of professors who will give expert opinions to news outlets – even though the fact that their livelihoods are affected ought to discredit them as authorities, at least in the traditional sense. Claims such as “experts say that the curriculum is developmentally inappropriate” are not valid, when the “experts” cited stand to lose personally.

I do not say this in order to attack faculties of education, or even the ATA.  It is simply necessary that we understand the realpolitik of education.

A final thought is in order.  John Dewey, famous as the pioneer of contemporary educational theory, emphasized the idea that public education is important to help form students as good citizens, and that there is an interrelationship between the students as society; in modern parlance, that the students are “agents of change.” However, the idea deconstructs quite readily: who gets to decide what a good citizen is?  While Dewey refused to decide, there are billions of dollars on the table in Alberta.  This is all about realpolitik – do the people, as represented by their elected government, get to decide what makes a good citizen?  Or is it the decision of a group of unelected elites?  This debate is not about educational principles, not really: it is about raw, naked power.

This is the context in which you need to read all discussion of the new curriculum. The Minister of Education has just poked a bear. To be honest, I am not sure she realized how big of a power she was taking on. That bear is going to portray itself as “speaking truth to power,” but the truth is the opposite. The Minister may control the big budget, but almost all of that budget goes into the pockets of the very people whose private interest she is trying to reduce. Arrayed against her is the big money – millions of dollars in unaccountable union dues, and hundreds of millions of dollars that pay the salaries of the very experts who are now lobbying for their own interests.

Make no mistake: you will hear lots of complaints about this curriculum. However, as discussed above, the claims are often poorly supported and represent significant conflicts of interest. We may want to support teachers and professors, but must understand the great powers involved are the Faculties of Education and those at the helm of the ATA, who exploit these issues to expand their own power. When you read comments about the curriculum, do so carefully, and be well aware of the depths at play below the surface.